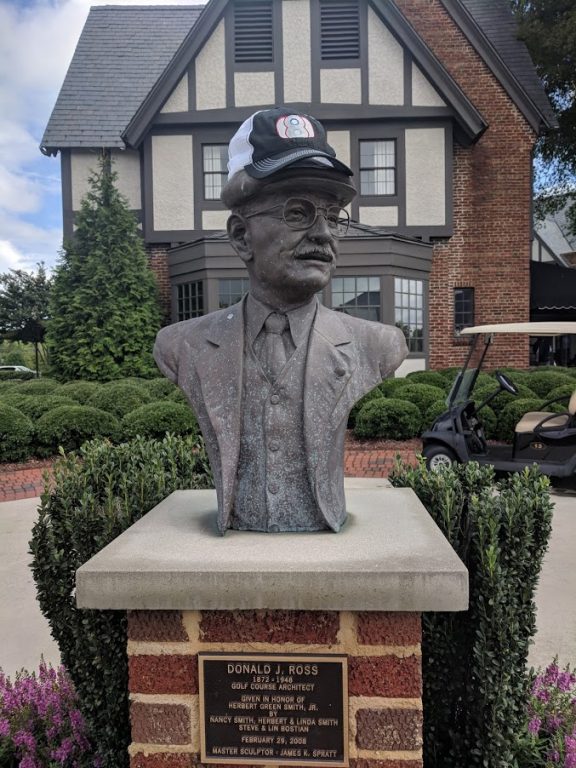 Because North Carolina is a #GolfState, we annually host not one but two PGA Tour events (eat it, Tennessee) in addition to regularly hosting major championships. The second is the Wyndham Championship, held in Greensboro at Sedgefield Country Club.

1. It ain’t the Masters, but the Greensboro PGA tourney has some history

If you consider the PGA’s Greensboro stop–with all its different names and locations–as one tournament (and most North Carolinians do–many over 50 will still refer to it as the GGO), it’s got an impressive history. It dates back to 1938 (the 6th oldest PGA Tour event), when the Greater Greensboro Open was won by Sam Snead (who would go on to win it 7 more times). Past champions in Greensboro include no only Snead but Billy Casper, Gary Player, Chi Chi Rodriguez, Seve Ballesteros, Ray Floyd, Sandy Lyle, Steve Elkington, Davis Love III, Mark O’Meara, K.J. Choi and, in the Wyndham years, Brandt Snedeker, Webb Simpson, Sergio Garcia, Patrick Reed, Si Woo Kim and Henrik Stenson. Love III has won in Greensboro 3 times, all names different. He won the KMart Greater Greensboro in 1992, The Chrysler Classic of Greensboro in 2006 and the Wyndham Championship in 2015.

2. It’s moving on the calendar (but not far)

This will be the last year of the Wyndham being held in late August. As part of a bigger rearrangement of the PGA Tour schedule (that puts more events, including the PGA Championship), the Wyndham will move to the first weekend in August beginning next season. It will still enjoy its spot as a lead-in to the Fed Ex Cup play (good for luring players) and it will be moving away from last weekend of the summer/opening weekend of college (good for luring crowds). Folks in and around the Wyndham regard the move as a net positive.

3. We’ll be rooting for the North Carolina guys

There are the obvious guys–Webb Simpson (from Raleigh, went to Wake Forest, lives in Charlotte) and Harold Varner III (from Gastonia, went to ECU). There’s also Raleigh’s Chesson Hadley and Grayson Murray. And don’t forget Carl Pettersson, who lives in Raleigh and went to N.C. State, and Doc Redman, a Raleigh native who won the U.S. Amateur last year. Johnson Wagner and Charles Frost both live in Charlotte and are in the field, as well. So you got options

4. If not a winner from North Carolina, how about from the ACC? 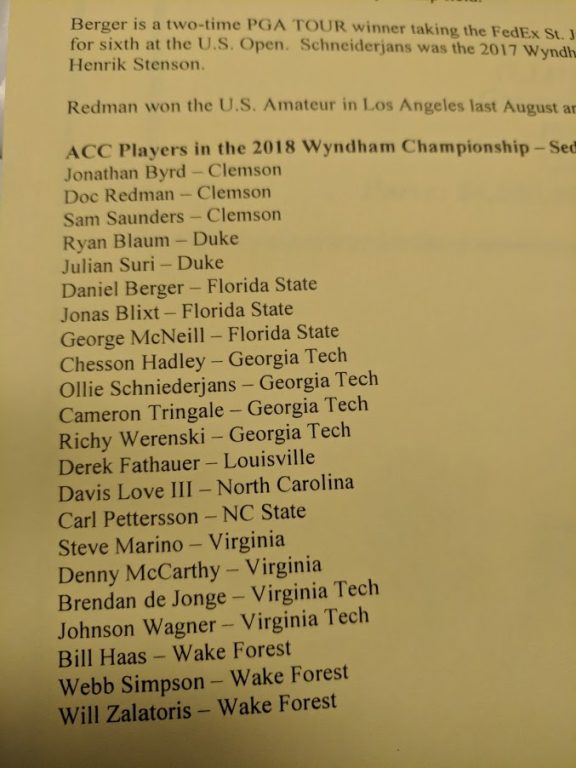 Although Friday is Ladies Day (females get free entry!), we’re tabbing Thursday as the best viewing day. The crowds will be at their lowest, and so will the temperatures.

No one is trying to hide the fact that it’s August, it’s North Carolina, and it’s gonna be hot. And wet. And probably hot. BUT, at least they have drinks that are not only cold, they’re frozen. Personally, I prefer the frozen lemonade at the Tito’s stand off the 9th green to the frozen margarita at Margaritaville. 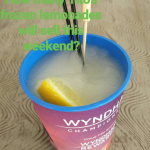 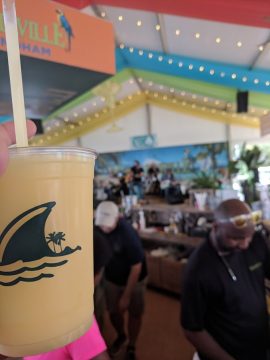 7. There are 80 tons of sand in this sand sculpture 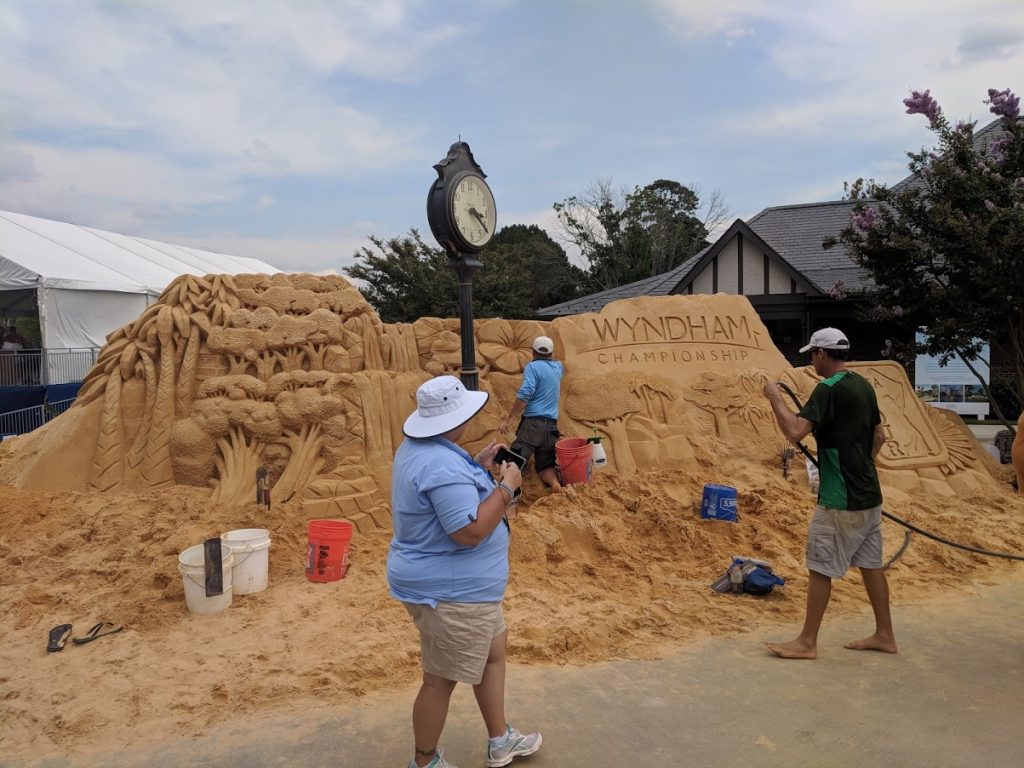 Almost every year, the Wyndham has had these dudes build a massive sand sculpture near the entrance. On the other side there’s a set up where you can sit on a throne and someone will take your picture as King of the Sand Castle. But I thought the PGA Tour logo in sand was cooler. 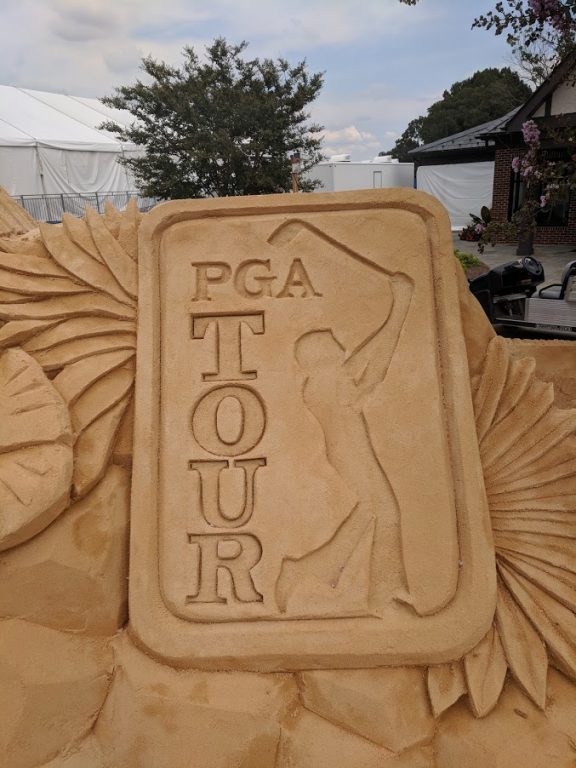 I think the PGA should hire these guys to put the logo in sand traps on tour. It would be awesome to watch pros stomp on the logos and hit off them.

8. Be on C-list celeb watch

Look, it’s North Carolina, we know where we stand. When the Hurricanes won the Stanley Cup, they were partying with Kid Rock and Cuba Gooding Jr. We don’t expect Denzel Washington or Billy Crystal or Shaq or Beyonce to show up at our sporting events. Your best bet is a NASCAR driver, or a bank CEO that thinks he should be recognizable but isn’t, or these guys: 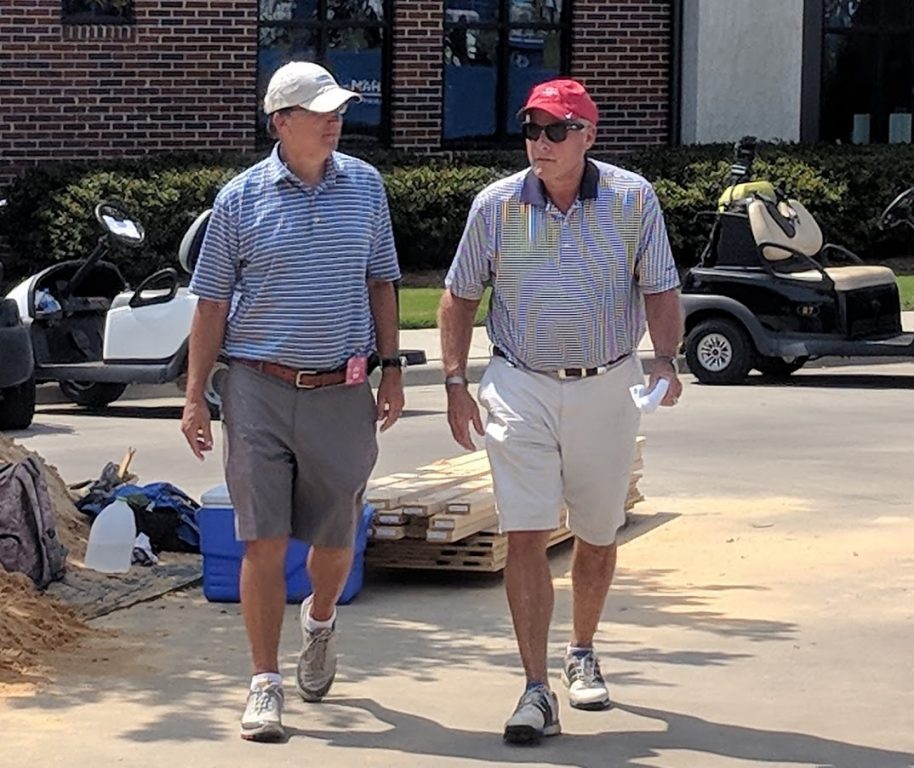