In a sport where most fans couldn’t tell you the team’s place in the standings or name many of the players, being “interesting” is more important than being “good.” And measuring by the Interesting Scale, the Carolina Mudcats have been the best team in minor league baseball the past ten days. Let’s take a look at some of what has occurred with the Brewers high-A affiliate in Zebulon (if you haven’t already seen it on some national news outlet).

Full disclosure: I do PA for the Mudcats. I played no part in the planning of these events. I just read stuff. But it’s been fun to watch.

The run started a week and a half ago with the best moment of them all. There aren’t many trends in sports that will never die, but I’m pretty sure this is one.

Every time you see one of these surprise military homecoming reunions, the most common t 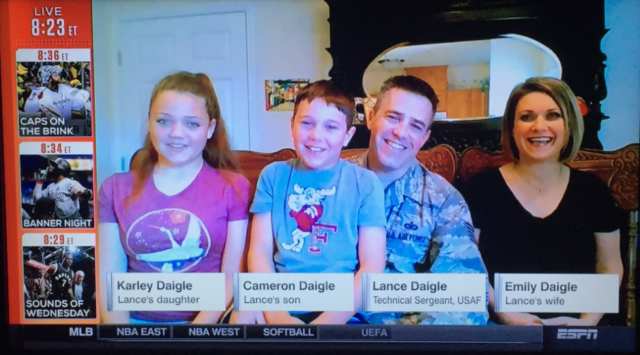 weet reactions are 1) “these never get old” and 2) some form of joke about holding back tears, or just an admission of crying. And for good reason. Todd Daigle catching the pitches from his kids Karley and Cameron was incredible to watch–also I feel like Cameron’s pitch gets a little overshadowed, he nailed it! Naturally, the feel good moment made the rounds on social media and soon enough it was on outlets all over the place, including ABC News and ESPN. Credit to Mudcats production guy Evan Moesta for the great camera work catching the reveal and the kids’ reactions.

Having set a bar impossible to clear, the Mudcats players went about making a viral moment of their own a few days later, when third baseman Lucas Erceg played the long con and pulled off a hidden ball trick. This one got some run on the ESPN talk shows like Around The Horn and Highly Questionable, as well as places like Sports Illustrated. Credit to the Mudcats’ cameramen and radio voice Greg Young who saw it the whole way and were able to clue in the fans in in a way the runner clearly was not.

Not enough for you? Ok, how about a completely unplanned, completely absurd bounce of a foul ball off a bat, on to the roof, popping off the top of the roof and plopping down directly into a beer cup. I know CBS Sports, as well as local outlets like WRAL, grabbed this one, and I’m pretty sure it ran on ESPN, too.

Not to be outdone, High Point native and current Mudcats player Weston Wilson caught an honorary pitch a few days later….and then made a pitch of his own, to his girlfriend (now fiance) Madison Hauck. Stop me if you’ve heard this one, but it made it on ESPN

As if that weren’t enough, some of this took place over the Mudcats Star Wars Weekend, when players were wearing these sweet Princess Leia jerseys. You can bid on them here. 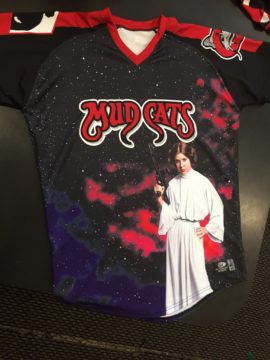 A homecoming. A hidden ball trick. A beer ball. A proposal. Leia jerseys. So how would the Mudcats close out their most recent home stand? How else: