During the month of March in North Carolina, sports fans to tend get distracted as the ACC Tournament and March Madness come to the forefront; I mean, can you blame us, though? The NCAA Tournament is one of the most entertaining events on the sports calendar. Loved ones, jobs, personal hygiene, whatever…all of this gets pushed to the back burner so we can figure out this year’s 5-12 upset (honestly, anyone but Yale, please god).

However, what can’t be accepted is for those folks to miss out on some amazing basketball that’s happening in the professional ranks, too, involving the Charlotte Hornets. Tonight, in Buzz City, Steve Clifford’s squad will go for their EIGHTH STRAIGHT VICTORY when they face off against the Dallas Mavericks. If you’ve been drowning in a sea of brackets, allow Stat Boi to quickly catch you up on this team’s recent play.

All season, in this space, I’ve written about this team’s improved offensive play, their depth, and the maturation of guys like Kemba Walker, Jeremy Lin, Marvin Williams, etc. But now, thanks in part to a softening of the schedule, Charlotte is really clicking on all cylinders.

In 2015-16, the Hornets have feasted on opponents at home: Charlotte has gone 25-9 on their court this season. The team has won seven straight, including six of those at the Cable Box; led by Kemba’s flamethrowing, Charlotte has scored at least 108 points in all of those contests.

The #Hornets have now hit 100 pts for the 7th-straight game.

Nine games above .500, at 37-28, they’re now tied in the loss column with the Miami Heat, who are currently No. 4 in the Eastern Conference. Charlotte trails El Heat by only a half game in the standings. (For the record, Miami hosts a very winnable game tonight against the visiting Denver Nuggets.)

Since the calendar flipped to March, Charlotte has sizzled offensively. Over the course of the last two weeks, the Hornets have scored an absurd 118.8 points per 100 possessions, according to NBA.com. That, my friends, rates as the No. 1 offense in the freaking league. They’re shooting 43.1 percent on three-pointers, which is No. 2 in the NBA in that span of time, behind only the Miami Heat (former Duke Blue Devil Luol Deng as been beasting on corner threes).

Walker has been this team’s driving force all season long, but in the last two weeks he’s gone bananas: 28.6 points, 6.9 assists, 5 rebounds; he’s also shooting 52.6 percent from the floor and sniping a ridiculous 49 percent on threes. Kemba has made 25 threes in his last seven games; only Steph Curry, Klay Thompson and Damian Lillard – all of whom are playing ridiculously well, too – have made more threes so far this month.

Charlotte has scored 123.1 points per 100 possessions, per NBA.com, with Walker on the court their last seven games. Of guys who have played at least 24 minutes per game during March, Kemba checks in at No. 2 in offensive rating – behind only Tristan Thompson. Oh, by the way, Marvin Williams and the newly-acquired Courtney Lee ranks No. 3 and No. 4, respectively, in that metric. These are good things.

He’s played like the third best point guard in the East this season (behind Kyle Lowry and John Wall). And as you can tell from his shot chart in March, Kemba’s been cooking on above the break (non-corner) threes: 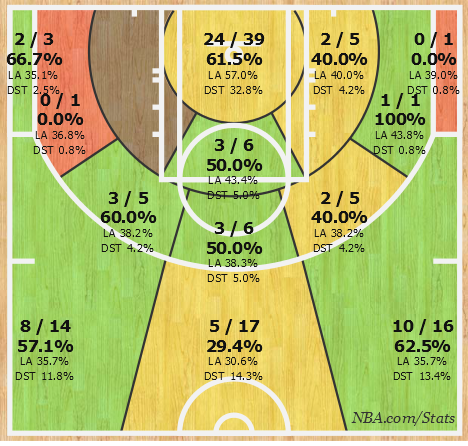 He’s been a demon in the pick-and-roll game, and Cody Zeller’s development as a rim-runner in this setup has been a major boon for the club, too. Of players who have been the roll man in at least 125 pick-and-rolls this season, Zeller is fourth in the league in points per possession – 1.15 — behind only dunkbot monsters like DeAndre Jordan and Hassan Whiteside. During the team’s seven-game win streak, Cody’s 19-28 (68 percent) on field goals less than eight feet from the basket.

We’ve been high on Marvin Williams all season long, but he’s turned it up another level in March, too. He’s shooting 50 percent on threes, 90 percent on free throws, and scoring better than 14 points per game in less than 29 minutes per contest. He’s been splashing from the corners, where he’s 10-13 (77 percent) on those extra valuable treys.

Big Al Jefferson recently returned to the lineup, and in a role we thought he’d excel in, the former All-NBA center is contributing to bench-heavy units. He’s doing serious damage against a lot of team’s backup big dudes – most of whom don’t have the strength of footwork acumen to contain the giant dancing bear that is Al Jefferson in the restricted area. Here’s his shot chart for the month of March: 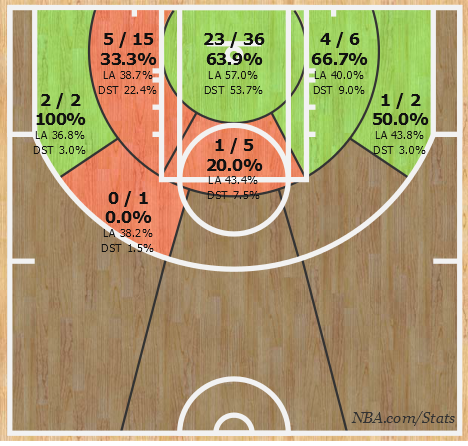 Charlotte plays four of their next five games at home; that lone road game will be a critical one this Thursday when they travel to South Beach to face the Heat. After that, the schedule really tightens up: nine of their last 12 games will on the road, which means this team needs to keep stacking wins in March. Things are going to get challenging down the stretch.

Lets enjoy this while it lasts, though – this team is fun as hell to watch hoop. They pass it; they shoot it; they defend; and Kemba Walker, who’s quickly becoming one of the best guards in the league, is on his by any many means. If you don’t have a team in March Madness – we’re looking at you especially, NC State and Wake fans – why not throw some weight behind this squad, instead of salt at UNC and Duke? It’s not like your bracket’s going anywhere, either.