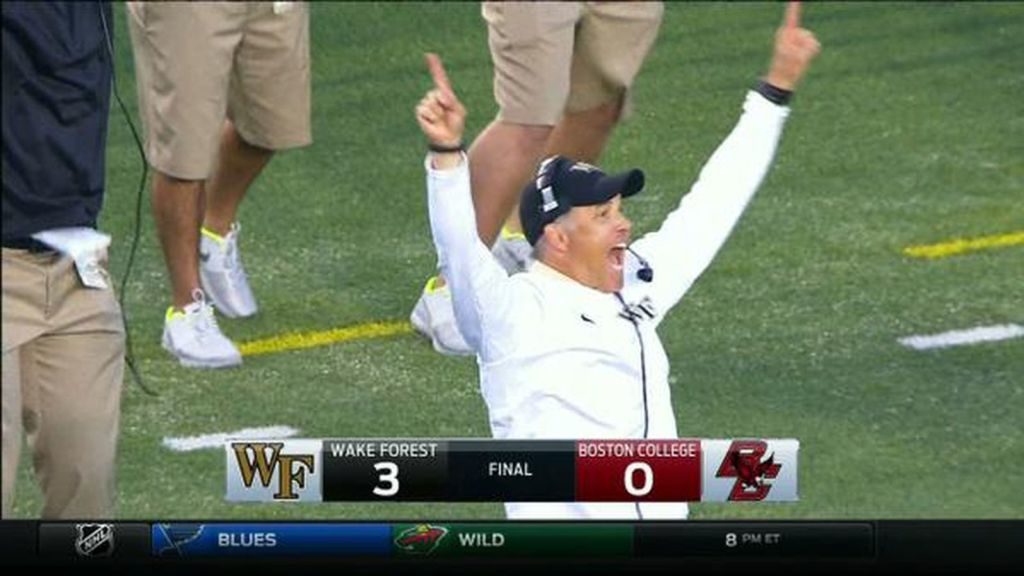 Football is important on any average day, but sometimes when we’re in the middle of a crisis it’s needed even more. Somewhat understandably, folks are upset that Miami and Florida State have both cancelled their weekend games in preparation of Hurricane Irma’s arrival. I get it. Especially from Floridians who would love nothing more than to have something to look forward to instead of having something to be afraid of. But when it comes to hurricanes, fear is the right emotion. Don’t ignore it. Get out, and get north. There shouldn’t be any distractions from packing up your belongings and getting yourselves, your family and your pets somewhere safe. Miami and Florida State both did the right thing, and hopefully anyone on the fence about taking this storm seriously have been pushed in the right direction now.

Having said that, 10 ACC games are on the schedule untouched by Irma …

The Heels struggled to contain whatever Cal’s quarterback’s name is from making the big plays, but there’s no cure for defensive problems like welcoming the defending Heisman Trophy winner. Coming into the season there was a lot of talk about UNC’s much-improved defense and how they’d carry the team through the season, but here’s the thing about that … being bad at offense doesn’t make you good at defense. It’s the Jackie Manuel phenomenon. Jackie was a lock down defender because he couldn’t shoot and he’s a good dude so we all had to pick something nice about him to say. The Tar Heels returned like one guy any of us had ever heard of from their offense a year ago, so they naturally became this defensive juggernaut because what else were we supposed to say? UNC’s biggest weakness was when the QB would break containment and the linebackers and defensive backs would have to make a choice between staying with a receiver or stopping the QB run. That’s frightening because it plays right into Louisville’s strengths … an incredibly mobile quarterback who can throw on the run playing behind six turnstiles “blocking” for him.

Why? Because UNC isn’t as bad on offense as we thought, and you have to think Fedora’s just going to play the better quarterback. Right? Maybe? Louisville is the most overrated team in the conference (although they do have the best player) and would be 0-1 right now if Purdue’s quarterback doesn’t make an awful throw for a pick six with the lead late in the game. Surratt doesn’t make that throw, mainly because he doesn’t make any throws. He defaults to running. Which is the way to beat Louisville.

Editor’s note – UNC gets to 33 points because Fedora goes for 2 on their first touchdown and doesn’t get it, then tries to chase that point back later in the game for no reason. “If he’d just kicked 2 extra points Louisville would have to score a touchdown” will be trending on Twitter around 3:45PM. This is my lock of the week.

There wasn’t much to learn about either team last weekend as Duke hosted FCS school NC Central and nobody ever watches Northwestern play. Duke has been bad against the Wildcats under Cutcliffe going 0-3 and looking awful in the last two. The only time Duke has beaten Northwestern in nearly 20 years was when freaking Ted Roof beat them to snap a 22-game losing streak. So if you’re a Duke fan who dropped a “I don’t care if we ever beat Northwestern again, just please let us win one damn football game” prayer in 2007, it’s been your fault.

Northwestern is favored by 3 but everyone seems to be picking Duke in this one, probably based on the incredible Vegas trend that Cutcliffe covers 70% of the time as an underdog. Or maybe because Darren Rovell was honorary team captain in week 1. The two teams, and programs for that matter, are almost carbon copies of each other, so it’s the true definition of a toss up. Duke won 7 of the first 9 games in the series, and Northwestern has won 8 of the last 9.

Why? Because numbers are everywhere in the universe and everything we do is a pattern that we can’t control. Duke wins tomorrow, and wins the next 8 after that to keep the pattern alive.

I can’t imagine Georgia Tech practice was fun this week, and you know Tech’s not kicking any field goals this Saturday. Or maybe for the rest of the season. He might not even dress a kicker.

Why? Because Tech’s going to score 23 touchdowns and they’ll go for 2 every freaking time. After going down 7-0.

Just look at the perfection that was the first half “anything you can do I can do bett … I mean worse” drive summary. But that’s not even the best part. Hoooooo boy, not even close. Wake pinned Boston College deep in their own territory after the opening 3-and-out to start the 2nd half, and then recovered a fumble on 2nd down on the Eagle’s 5 yard line. The eventual game-winning score came on a negative 2 yard drive. THEY LOST YARDS ON THE POSSESSION THAT WON THE GAME. And STILL that’s not even the best part.

With 3:47 to go, Wake was punting out of their own end zone up 3-0. BC’s return man catches the ball at the Wake Forest 40 yard line and RUNS BACKWARDS FOR A 9 YARD LOSS. BACKWARDS. But it’s cool because a pass interference penalty and a 17 yard run gives Boston College a first down at the Wake 17 yard line with under 2 minutes to play. But then it’s NOT cool because Boston College fumbles on a quarterback sneak on 3rd and 1 and Wake recovers on their own 4 with 1:09 to play.

Wake runs a couple of dives and burns Boston College’s last two timeouts … oh wait, let me back up and tell you that BC called their first timeout with 11 minutes left in the 4th quarter after a 1st down incompletion, which stopped the clock anyway. But again, it’s cool because WAKE FUMBLES ON 3RD DOWN and Boston College recovers on the 11 yard line with 56 seconds left.

Now try and picture this. BC is down 3-0 with the ball on the 11 yard line, 56 seconds left and no timeouts. Two yards on first down, then 8 more on 2nd down to get a 1st down at the Wake Forest 1. First and goal from the 1, clock stopped, down 3 points with no timeouts and about 20 seconds on the clock. Maybe a run/pass option to try to score and/or stop the clock if nothing’s on? Nope. Boston College runs a QB sneak and gets stuffed. Line-up quick to clock the ball and get your field goal team on, right? Nah. Nah, fam. Boston College huddles up to call a play. THEY HUDDLED. WITH THE CLOCK RUNNING. Time expires before they even get to the line to run another play and Wake wins 3-0.

Why? Because both of these teams are way better than they were two years ago.

Why? Because Penn State is wayyyyyyyyyy better than Pitt.

Why? Because that was Virginia’s halftime score against Florida in the NCAA tournament last year and I never want anyone to forget it.

Why? I didn’t get to see the Hokies play last weekend, but based on the media that follows the team, anything short of a national championship would be the biggest choke ever.

Yes, let’s all make fun of NC State for blowing their College Football Playoff chances against South Carolina. But if you’re doing that, at least admit that State was the far better team. Statistically it wasn’t even close. The entire perception of NC State as a football team changes if one or two plays end up differently and if you want to want to ignore how dominant the Wolfpack were, that’s on you. State was a good football team last Friday and they’re the same football team this Friday.

Marshall was out-gained 429-267 against Miami of Ohio, so just imagine what State’s offense will do to them.

Why? Because Marshall was out-gained 429-267 against Miami of Ohio and still won, which is the recipe to beat this Wolfpack team.

It’s pretty much donezo for the ACC if Clemson loses this game.

Why? Because if we learned anything from week 1, it’s pretty much donezo for the ACC.