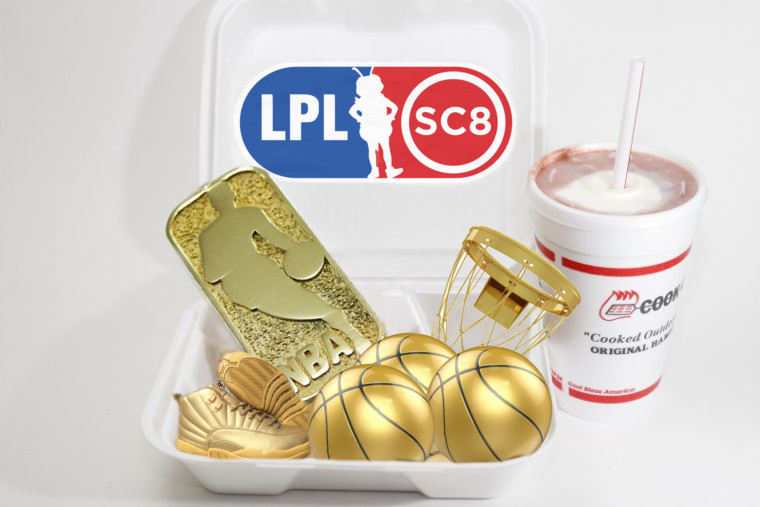 It’s hard to believe we’re already at the end of the NBA’s 82-game slate; what started two weeks before Halloween concludes as pollen cakes the sidewalks here in North Carolina. This, of course, means it’s awards season (#szn?) for the league. And while everyone is handing out their selections for MVP, All-NBA, and once again Googling how to spell “Giannis Antetokounmpo,” we here at SportsChannel8 have our own award to give out, too.

It’s an award that pertains to the special relationship between North Carolina and the NBA.

If you pay attention to hoops — at any level — you know NC’s reputation as a basketball state. Home to prep prodigies, the apex of college basketball — Tobacco Road — and, of course, our beloved Kemba Walker and the Charlotte Hornets. We love basketball in this state — just ask this guy.

In the League Pass Lair, we wanted to find a way to honor one of our state’s finest products that’s having an impact in the NBA this season. Without further adieu, let me introduce the first annual Golden Cookout Tray, which belongs to David West of the Golden State Warriors — the finest that Garner, North Carolina has to offer.

(This glorious award comes thanks to the tireless work of the Weather Moose, SC’8’s graphic editor and trophy designer.)

Why the Cookout Tray, you ask? Well, hang with me for a second

There are a lot of North Carolina products playing in the NBA; some of these guys are among the best in the world, and are compensated justly. Chris Paul, John Wall and Steph Curry will make over $77 million combined this season playing basketball. (It could’ve been more, too.)

Obviously, we love these three dudes; we routinely gawk at their absurd talents. All three are on max or ‘super-max’ contracts, and they are worth every penny they are paid.

However, part of makes the Cookout tray so awesome is its incredible value: only $5 for an ungodly amount of food.

And while we would certainly never knock any player for getting as much money has humanly possible, the LPL wants to honor a North Carolinian that plays on more of a bargain contract, like the tray. To qualify for this award: A player must be from North Carolina, and make less than $10 million per season — roughly less than 10 percent of the 2017-18 salary cap.

Raleigh’s P.J. Tucker, who makes a little under $8 million for the Houston Rockets in year one of his mid-level exception contract, was a strong contender for this award, too, but David West gets the veteran’s edge. West is at the end of a one-year deal he signed for the veteran’s minimum: $2.3 million.

(It also doesn’t hurt West’s candidacy that he plays most of his games in the Pacific Time Zone — after-hours on the East Coast, when most reasonable Cookout patrons make their run to the neon red glow of that heavenly sign.)

New tricks for an old head

For most of his career, David West has excelled has a pick-and-pop jump shooter or a low-block bully; the former is how he averaged 19 points over four seasons, and made two All-Star teams while partnered up with Chris Paul.

In his two seasons in Golden State, though, West has extended his career by being much more than a gritty rebounder, and a sage presence off the bench. He’s evolved with the times; not only has West flashed a rock-solid midrange jumper, but he’s also turned into a wonderful bench unit facilitator and passer — while playing up a position now at center.

When West, at age 37, enters the game, he can be utilized as an offensive fulcrum for the Warriors; this is true despite the fact that he plays with four All-NBA teammates in the prime of their careers.

Golden State can dump the ball to West at the elbow, or in the foul line extended area of the floor, and run split action and cutters off of him. He and Klay Thompson have exceptional chemistry together, working as a tandem on the Warriors secondary lineups.

West assisted Thompson 38 times this season; the All-NBA guard shot 51.2 percent on two-point attempts and 45 percent from deep after passes from West. (Thompson shot a decent 60 percent off cuts this season, per NBA.com, thanks in part to West.)

The cagey vet can do more than just distribute from a stationary position, though, while Golden State’s motion offense whirls around him; West can still make sharp movements in the screen-roll game, and nifty reads in space.

West has a career assist rate of 13.6 percent; however, in two seasons out in Oakland, the 6-foot-9 center has assisted on over 22 percent of his teammates’ field goal while on the floor. That evolution is pretty remarkable. In fact, it’s tray-worthy, you guys.

After a sizzling start to the season, West finished shooting 47 percent from the midrange, which ranks in the 85th percentile of the NBA, per Cleaning The Glass. He also shot 75 percent in the restricted area, which is excellent — to go along with 31 dunks this season. West can play one off those elements off the other, too —using the threat of his jumper to clear pathways to the hoop.

Even though we’re awarding David West with a (fictional) trophy named after a delicious fast-food menu item (is it edible or not: no one knows), it appears as though West’s diet doesn’t have much room for foodstuffs of questionable nutritional value these days. That’s his loss, I suppose (more for me); however, if you’re still able to do this despite being four months away from turning 38, keep doing your thing.

David West: Gets defensive about it

On a similar note, West is still physically able to help the Warriors defensively, too. West finished the regular season second in the NBA to only Rudy Gobert — my vote for Defensive Player of the Year — in ESPN’s DRPM.

With him on the floor, Golden State allowed just 99.5 points per 100 possession — tops on the team. It of course helps that he gets to play plenty of his minutes with Draymond Green and Thompson — two otherworldly defenders — mostly against opposing second units. But still: this is awesome.

West blocked a career-high 3.6 shots per 100 possessions, and opponents shot under 59 percent against him at the rim. That won’t set the world on fire, but again, for an aging, undersized center, that’s damn good.

The NBA playoffs start up this weekend — make sure to tune in. This is about to be a lot of fun. And when you’re up too late watching David West and the Warriors play, take solace in the fact that if/when you hear your stomach growl, you know that at halftime — or, hell, after the game — you’ll be able to make a necessary Cookout run. Time is never of the essence.