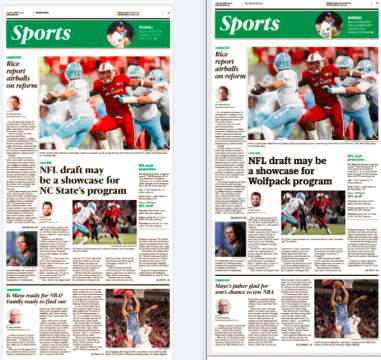 Last summer, the sports sections of The News & Observer and The Herald-Sun became like brothers with access to the same resources when they consolidated, with the section run out of Raleigh.

The print editions look more like twins. Many days, they are identical twins.

With the consolidation, some of the longtime beats disappeared. The loss of dedicated beat writers for N.C. Central and the Durham Bulls isn’t new. What is relatively new is the accelerated loss of much contrast between the two print sections this month. In addition, the sports-front layouts hardly ever change.

Ultimately, it might only matter to the few readers regularly read both print editions. But for some longtime Triangle residents who remember when the two newspapers were fierce competitors with plenty of contrast and their own styles, seeing them so similar is unsettling.

For months, the headlines, cutlines, body type and design style have been the same.

Partly because of a procedural change made at the McClatchy News Desk East in Charlotte, few distinct differences between the print sports sections remain. Although the website design for each sports page is a little different, the story selection usually is similar.

Since April 3, one designer each night has been assigned to design both sports sections. Many times beforehand, the same stories were assigned for each sports section but the picture selection and headlines were sometimes a bit different.

In the first nine days after this began, there were always at least slight differences in the pages, with headlines flowing differently — or at a different size — or a different promo at the top.

The only large differences since then came when N.C. State or Carolina Hurricanes stories that ran on The H-S sports front were on 1A of The N&O, or when the Durham Bulls preview ran only on Durham’s sports front.

Beginning with the April 12 sports sections through Thursday, the sports fronts have been identical nine times (one of those with a different teaser at the top), including Thursday (see photo). And the uniformity has spread inside, with as many as three interior pages also identical some days and at least two most days.

“Truthfully, it’s intentional,” Robyn Tomlin, the executive editor of both newspapers, said via email. “With Sports, there’s clearly a lot of overlap in the audience interests between the two newspapers. And there are some differences.

“When the best Sports content available for both newspapers is the same stuff, there’s no reason to duplicate design work just to make them look different. There are very few people who subscribe to both newspapers,” she said. “I’d rather focus our resources on creating the best stories than on repackaging them when there’s not a true audience value in doing so.”

As noted in this space last month, most of the sports fronts in February generally followed one template. In April, all but two sports fronts have followed that same five-column template: A one-column story down the left side of the page, just above a story that goes across the bottom five columns, with the featured story taking up the rest of the page.

Uniformity is the byword and creativity is not emphasized in print-edition design with most efforts going toward digital.

McClatchy down to three sports writers at flagship paper

The McClatchy Company, which owns The N&O and The Herald-Sun, laid off 14 newsroom personnel at its flagship newspaper, The Sacramento Bee, earlier this week.

Eight people at the design hub in Sacramento, McClatchy News Desk West (one of three McClatchy hubs, with the others in Charlotte and Kansas City), were laid off, as well as Ailene Voisin, who was the Bee’s lone sports columnist. That leaves the Bee with three sports writers.

Minor-league game coverage has been scaled back even further than The N&O’s preconsolidation coverage of the Bulls and the Carolina Mudcats, particularly with there being no Bulls beat writer.

It’s another case of today’s approach at The N&O/The H-S: Funnel staff resources to topics that perform well digitally and lightly cover topics that don’t.

“We are going to write features about the Durham Bulls and Carolina Mudcats,” Steve Ruinsky, the sports editor of the consolidated N&O/H-S site, said via email. “We won’t do very much game coverage.”

There was a short season preview of the Bulls, which appeared on the sports front of The Herald-Sun print edition and insideThe N&O’s print sports section, but there was no Mudcats preview.

The Bulls preview that appeared in The N&O and The Herald-Sun print editions and on the websites was accompanied by a picture of Brad Miller, who isn’t on the Bulls roster and has been a regular in the lineup of the Bulls’ parent club, the Tampa Bay Rays (although he did spend time on the disabled list).

If you wanted a newspaper season preview on the Mudcats, The Wilson Times wrote one and the Rocky Mount Telegram ran three stories ahead of the opener.

In previous seasons, while The Herald-Sun covered virtually every Bulls home game, The N&O — except for opening night and possibly playoff games — devoted only a few paragraphs and a box score to each Bulls and Mudcats games. The N&O also used to have a weekly minor-league baseball page.

Deadlines make it impossible for any sort of game story to appear in the next day’s print editions for most games. But no game reporting is even appearing on either newspaper’s website. This is the first season that no Bulls or Mudcats box scores have appeared in either print edition (though most would be two days old).

The only daily presence of either team in the newspapers’ print editions is the score (often two days old) that appears in the standings. Nothing regularly appears on the websites. There are automated Associated Press stories for both teams available, produced through Durham company Automated Insights. But Google searches only turn up those Bulls and Mudcats AP stories from websites of newspapers outside of the Triangle.

On the Bulls’ opening night, the consolidated staff had a video and a story with only minimal game details from Steve Wiseman, who used to cover numerous Bulls games when he was sports editor of The Herald-Sun.

Fans can read stories about each game on the teams’ websites.

If you’re looking for independent game coverage of the Bulls, you can read stories about most home games from Bob Sutton, the sports editor of the Times-News of Burlington, who also wrote a season preview. If he’s not at the game, the Times-News at least has a short story.

You can get additional Bulls analysis from Chris Wise at his Watching Durham Bulls Baseball blog.

Last weekend, White Sox pitcher Danny Farquhar suffered a brain aneurysm and now faces a difficult recovery. It wasn’t noted in either newspaper that he pitched in 12 games last season for the Bulls. That’s probably because the Farquhar notes were reported through major-league notebooks that are templates used by many McClatchy newspapers.

For Mudcats game coverage, you’ll have to count on The Wilson Times, which runs stories sporadically, and the Rocky Mount Telegram, which has a staff writer at some games. The Telegram also writes Mudcats notebooks.

Minor-league baseball is getting covered by large state newspapers.

There have been more than a half-dozen Charlotte Knights stories in The Charlotte Observer, another McClatchy newspaper, since the team broke camp.

The Burlington paper also covers the Burlington Royals when Appalachian League season starts. The Fayetteville Observer covers many games of the Carolina League’s Buies Creek Astros (a franchise that will move to Fayetteville), the News & Record of Greensboro covers the Greensboro Grasshoppers and the Winston-Salem Journal covers the unfortunately named Winston-Salem Dash (that’s a hyphen between “Winston” and “Salem”).

The News & Record wrote recently about the impact of the new rule this season that places a runner at second base at the start of each extra inning.

After a long hiatus, Indy Week’s sports blog returned earlier this year for the first time since June 2015, while Lisa Sorg still was editor of the alternative weekly.

Jeffrey Billman, who became editor two months after the previous iteration of the blog ended following Sorg’s dismissal, said he hadn’t thought of bringing the blog back until one of its three current contributors, Timothy Bracy, suggested it.

“We decided to test drive it a bit and see how it went, and we liked the writing that Tim and his team have produced for us, so we’re still at it,” Billman said via email.

The first two entries were early-January posts about the Carolina Panthers by Bracy. The other contributors are Elizabeth Nelson and Michael Venutolo-Mantovani.

“I’ve pretty much given them free rein to write about whatever they want,” Billman said. “They started out focused on the football playoffs and March Madness, because that’s what was happening, but lately they’ve been branching out some. I really liked Mike’s piece about the curling club, for example.”

Most of the contributions for the blog in 2015 and beforehand were from Mike Potter, an author and former Herald-Sun sports writer, and Neil Morris, who now contributes at WRALSportsFan.com.

Bomani Jones, a former Triangle radio host and Durham resident, debuted a new podcast earlier this month with a familiar name: “The Right Time with Bomani Jones.” It is released Tuesdays and Thursdays each week and has the same name as the ESPN Radio show he did from March 2015 until December 2017.

Jones, now based in New York, usually has a guest on the Thursday podcast.

It’s the fourth of what ESPN calls “personality-driven” podcasts, after “Jalen and Jacoby” and “Sports? With Katie Nolan” each debuted in January and “Marty Smith’s America” began in March.

Jones will be co-host of a noon weekdays ESPN television show with Pablo Torre that is expected to debut later this spring. The date of the debut and the name have been determined, and are expected to be announced by next week.

Jones does a semi-weekly podcast, “The Evening Jones,” on his website and makes an appearance every Friday afternoon on the “Adam and Joe” show on WCMC (99.9 the Fan).

Apologizing to the team for saying “damn”? Yes, North Carolina assistant coach Hubert Davis, who leads team Bible study, wasn’t happy on the rare occasion that a curse word came out of his mouth. That and much more on his path from ESPN analyst to trusted assistant in this story in The Fieldhouse from C.L. Brown. He never once saw himself as a coach and now some see him as a possible successor to Coach Roy Williams.

From an early age, Adam Himmelsbach wrote in the Boston Globe, former Duke star Jayson Tatum never had a plan B. He was intent on being an NBA star so that he could give himself and his mom a better life. That has all worked out quite nicely as a Boston Celtic.

Former Duke star Quinn Cook cried in a car by himself when he didn’t get drafted. The Atlanta Hawks waived him in September. Jake Fischer of Sports Illustrated wrote about his winding NBA journey that now has him on the Golden State Warriors roster.

In the wake of the death of former Duke coach Vic Bubas, Barry Jacobs wrote in The N&O and The Herald-Sun about how Bubas, along with Dean Smith and Bones McKinney, helped shape the ACC in the 1960s, although many forget about the contributions of Bubas and McKinney.

Baseball is thriving at N.C. State, Duke and UNC. In The N&O and The H-S, former Durham Morning Herald sports editor Ron Morris wrote about the key decisions that led to the success.