Native North Carolinian and recently retired football coach Paul Johnson is a treasure. He has been a meme: 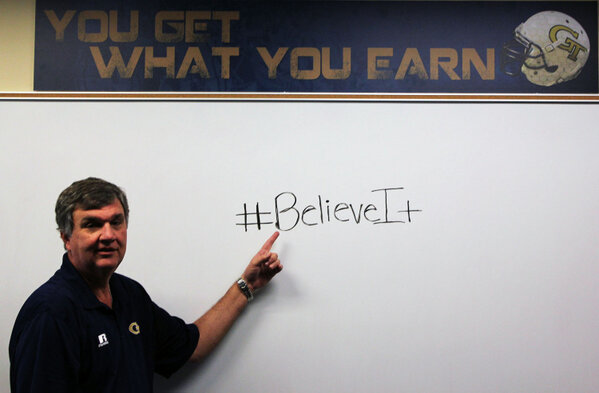 He has been a GIF:

He has been an ACC champion:

And during Saturday’s Cotton Bowl, as Clemson was decimating Notre Dame, he became the funniest guy in the ESPN Film Room. One of the multicast options the network offered, the Film Room features 4 coaches giving instant breakdown and X and O talk about the plays as they’re happening. It’s not terrible the times I’ve watched, but it’s a decidedly inferior way to view the live broadcast as your main option. But the highlights of the coach chatter are pretty entertaining. The highlights typically include some playful banter OR, even better, one of the coaches seeing the offensive and defensive formations as the players approach the line and calling out the play–especially a big play. It really is cool to see how sharp some of these coaches are.

The Cotton Bowl Film Room included UNC’s Mack Brown in the lead role, along with Memphis’ Mike Norvell, Wake Forest’s Dave Clawson, and the aforementioned Johnson, who just completed his coaching career at Georgia Tech. While there was plenty of good analysis, and I thought the coaches meshed well and didn’t try to sound smarter than each other, the highlights almost all belonged to PJ.

Some people noted that he wasn’t talking as much as others, which was correct.

As was his M.O. when he was coaching, Johnson used few words, but got the most out of them. It started with him saying he was deciding between being an ACC replay official or a greeter at Wal-Mart. Johnson makes it more clear he’s not a big fan of replay officials by surmising he’s “not old enough to be one.”

Johnson later points out that Clemson was using blocks in their offense that, if employed by Johnson at Georgia Tech, would be called “dirty.” Johnson also takes  shot at himself for limiting his QB’s chances to throw.And finally, Johnson caught a pretty good jab from Clawson, who turned PJ griping about the run-pass option rules into a bust on cut blocking.

He’s not quite college football’s Charles Barkley yet, but he could get there. ACC Network….call this guy.