We will keep things shorter in this week’s St8 of the NBA: our efforts will focus specifically on one person — LeBron James, who is very, very good at basketball.

It was never supposed to go like this; the current scenario — it wasn’t a part of LeBron’s well-manicured plan. And yet, here we are: watching him do everything — almost literally. Welcome to Year 15, and the 2018 NBA Playoffs.

It’s been a decade since a LeBron-led team looked this wounded in the playoffs. Kyrie Irving’s force of a trade to Boston (a move he now looks like a genius for initiating) last offseason sapped Cleveland of its No. 2 talent.

The team’s midseason funk-fest — a 6-13 record strung across late December and into early February — sparked a bit of madness at the trade deadline for Cleveland. Over this stretch of games, the Cavs allowed over 111 points per 100 possessions; only the rudderless Phoenix Suns were worse in this department.

As bad as that sounds, the team’s collective body language was worse. Opponents ran free to the rim on pick-and-rolls, or raced past the team’s bottom-five transition defense. All the while, the Cavs sulked, pointed fingers and looked as if they wanted to be literally anywhere else in the world.

In a state of free-fall, the Cavs triggered a flurry of trades; Cleveland got younger, and possibly deeper. The moves, however, didn’t land a star player in return — say, Kemba Walker. (Cleveland did manage to not part ways with its top non-LeBron asset, though: the 2018 Brooklyn Nets pick.)

Regardless, the Cavs were left with a roster still devoid of significant two-way talent, outside of LeBron James. If Cleveland is to make it back to a fourth straight NBA Finals, LeBron will basically have to do everything. Welcome to Year 15.

Playoff Mode: Unlike Any Other

Fast-forward 10 weeks later, and here we are. The Cavaliers have the Indiana Pacers pushed to the brink of elimination; Cleveland leads the series 3-2, with Game 6 in Nap Town on Friday. To an outsider, that may seem good — on paper, at least; however, that’s nowhere close whole story.

This Cavs team is deeply flawed, worsened by the fact that its other All-Star, Kevin Love, is playing through a significant thumb injury. This first round series is an absolute slog for Cleveland — a complete departure from years past.

LeBron has absolutely dominated the Eastern Conference playoffs, for the better part of a decade. Do you remember the playoffs a season ago (I do!) — when LeBron and the Cavs bulldozed through the East? Prior to meeting the Warriors in the finals, Cleveland went 12-1 in the East, scoring over 120 points per 100 possessions. The Cavs outscored their opponents by a combined 177 points.

Departure From The Plan

The Cavs followed a relatively simple game plan this season: Use LeBron to outscore the opponent. When that didn’t work, use LeBron more. (On second thought: Hey, maybe it wasn’t such a great idea to have him play all 82 games for the first time in his career, and have him lead the NBA in minutes — just a thought.)

Playing off of LeBron’s gravity and passing, Cleveland built a top-5 offense predicated on three-point shooting. Nearly 38 percent of Cleveland’s field goal attempts this season (No. 4 in the NBA) came from beyond the arc. The Cavs launched 32.1 threes per game — fifth most in the league — and shot 37.2 percent from deep, No. 6 in the NBA.

The vast majority of Cleveland’s three-point attempts came off the catch — nearly 23 per game. Only five teams launched more catch-and-shoot three-pointers than the Cavs this season. According to NBA.com, the Cavs splashed a sizzling 39 percent of these chucks, too: another top-10 number.

And where would this team be without Kyle Korver, who has been Cleveland’s second best player — despite playing just 3 minutes in Game 1? Korver has connected on 13-of-30 catch-and-shoot three-pointers in the postseason (43.3 3P%). That means the rest of the Cavs are just 23-of-83 — or 27.7 3P%. This is a recipe for disaster.

Korver’s off-ball movement, and screening, has been critical to the Cavs suddenly-sorry offense. Outside of LeBron’s manic spinning drives to the hoop, Korver is really the only on offense that moves; everyone else sorta just stands there.

(Korver is shooting 70 percent and scoring 1.85 points per possession coming off screens in the playoffs.)

With LeBron and Korver on the floor together this series, Cleveland has a net rating of 7.4 points per 100. Once Korver sits, and it’s just LeBron: that number drops to -4.1 points per 100. Yikes.

This has, of course, heaped insane amounts of pressure and responsibility on the shoulders of LeBron James. LeBron has played nearly 43 minutes per game in the playoffs — tops in the postseason. In the playoffs, he ranks fourth in usage rate (33.9 percent) and second in assist rate (47.1 percent). He also leads the playoffs with nine secondary assists, too.

In clutch minutes, his usage rate has ballooned to 37.4 percent; and while he’s seemed gassed at the end of some of the games, he’s still been efficient when needing to close — 71.7 eFG% in clutch minutes.

As LeBron, 33, transitioned to the back-nine of his career, this is not the type of usage we expected to see.

LeBron has found some success from the midrange (43.5 FG%), especially when he went crazy in Game 2 (46 points on 17-of-24 FGA). However, with his three-ball falling short, for the most part, LeBron has had to just force his way to the rim.

James has 60 field goals to his name in this series — with 39 of them coming in the restricted area. LeBron is shooting 81 percent at the rim, and 75 percent inside of five feet. With Indiana largely single-covering James, the paint has been LeBron’s best friend. 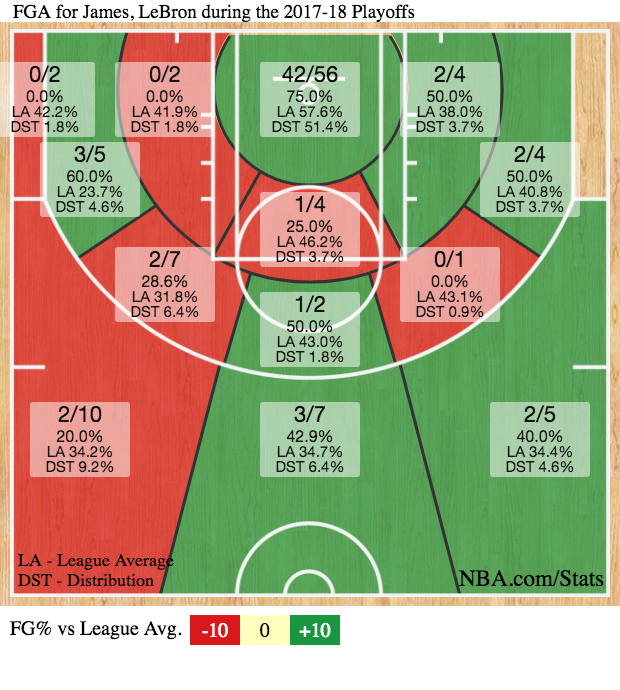 It’s hard to imagine the kind of toll this is taking on LeBron’s body; he’s responsible for generating nearly all of Cleveland’s offense. He leads the playoffs in box plus/minus, offensive box plus/minus and win shares — 1.6 over Cleveland’s five games. This is insane.

And yet, somehow, he continues to save his best for last.

If you’ve spent any form of time watching basketball over the last decade, you likely have some understanding of LeBron’s postseason excellence. The 48 Special against the Pistons 11 years ago; his buzzer-beater vs. Orlando in the 2009 playoffs; Game 6 of the Eastern Conference Finals up in Boston, back in 2012 (my personal favorite); the Iguodala soul-snatching chasedown block in 2016.

At this point, there are too many to count, and dignify properly.

Well, this week, he added another one, amazingly. I don’t know how he consistently is able to reach back, and deliver again — time after time. LeBon nearly won Game 5 all on his lonesome, and he personally made sure to drive the nail in Indiana’s coffin.

(Note: This was also the first time in LeBron’s career that he’s attempted 15 or more free throws and made all of them.)

The Pacers probably should’ve doubled or trapped — perhaps with Bojan Bogdanovic, who was covering Jeff Green, who is not good at basketball — because everyone watching in the world knew what was about to happen.

(*Summons Inner Mike Breen* BANG!) This came after he got away with a goaltend on the previous possession in defense of Victor Oladipo (a historical footnote, now), but like, of course he then went on to make this shot. This is just the shit that LeBron does, man.

Who knows what will be in store for Game 6, back in Indianapolis; even if Cleveland escapes this series, there are still plenty of teams that would love a run at the throne: Toronto and Philly lurk. For the time being, just enjoy what we have — the best of all-time, LeBron James, still holding onto the crown.