Less than a week after the Houston Rockets managed to pull off last summer’s trade for Chris Paul, the franchise made another move. It was a transaction that certainly wouldn’t generate the same bluster as the swap for Paul, especially outside of nerdy NBA circles; however, it’s impact would be damn important, too.

On the first day of 2017 free agency, Houston inked veteran forward P.J. Tucker for the mid-level exception: four years, $32 million. If Tucker hit free agency 12 months prior — in the 2016 spending bonanza — he likely commands double his current rate. Now, nearly a calendar year later, Tucker continues to provide exceptional value to a Houston club that wants to do the impossible: upend the Golden State Warriors and win a title.

After back-to-back wins in Game 4 and Game 5, Houston has Golden State on the brink of elimination. Outside of some ridiculous second-half shot-making from Chris Paul, the difference in this series has been Houston’s defense — led by Tucker.

Golden State has been held under 95 points in each of the last two games. In the fourth quarter of Game 4, Golden State put up a paltry 12 points — less than 0.5 points per possession. This simply doesn’t happen with this team, especially in Oakland; it’s a total outlier.

That’s due, in part, to Houston controlling the pace of this series. This series has averaged just under 98 possessions per game — with one notable outlier: Game 2 (102 possessions). According to NBA.com, Game 5 had just 96 possessions; two evenings prior, Game 4 had 95.

(Also in Game 4: Less than 11 percent of Golden State’s possessions started in transition, per Cleaning The Glass — a super-low number, especially with Steph Curry in the lineup.)

On offense, Houston has taken the air out of the ball — hunting switches for James Harden or Paul to attack. Defensively, the Rockets have forced the Warriors into iso-ball, too. The beautiful machine that is Golden State’s offense has scored under 98 points per 100 possessions in each of the last two games. The team’s patented actions — off-ball movement, misdirection, split cuts, back cuts — have all been neutralized with Houston’s switching and help defense.

Klay Thompson posted a good shooting performance in Game 5 (four turnovers, too, though), but Houston has managed to take some of his catch-and-shoot looks. In the regular season, Thompson averaged 5.6 three-point attempts per game with no defender within at least four feet of him. He shot 47 percent on said attempts, too.

Against switch-evening Houston in the playoffs, though, that number is down to 4.8 per game. In Games 2-5, it’s dipped even further: 3.1 per game.

He’s still shooting a good clip on those looks, but the sheer volume of attempts has been knocked down. That’s important; it’s forced the Warriors to play match-up basketball, and attack more one-on-one with Curry and Kevin Durant.

Golden State stated even went to pick-and-pop action with Curry and Thompson last night to try to free up the world’s top catch-and-shoot bomber. That’s a great play, and it’s really tough to defend when Klay slips; however, this is the Warriors going deeper into their bag of tricks to produce clean looks for Thompson.

P.J. Tucker has been asked to carry a demanding workload as Houston’s defense has dominated the last two games. As Houston’s rotation tightened, with only one day of rest (and travel) in between contests, Tucker played a combined 86 minutes in Games 4 and 5.

In those minutes, Houston is team-high +21 with Tucker on the floor, and giving up just 94 points per 100 possessions. Tucker has sat a mere 10 minutes over the last two games, and in that span: Golden State has outscored Houston by 14 points — with the Rockets defense allowing 1.21 points per possession, per Second Spectrum.

For the series, the Warriors have scored 1.25 points per possession (a great number) when Tucker is on the bench (only 50 minutes).

(Man, could they really use a healthy Luc Mbah a Moute in this series. There should be a role for him against Golden State.) 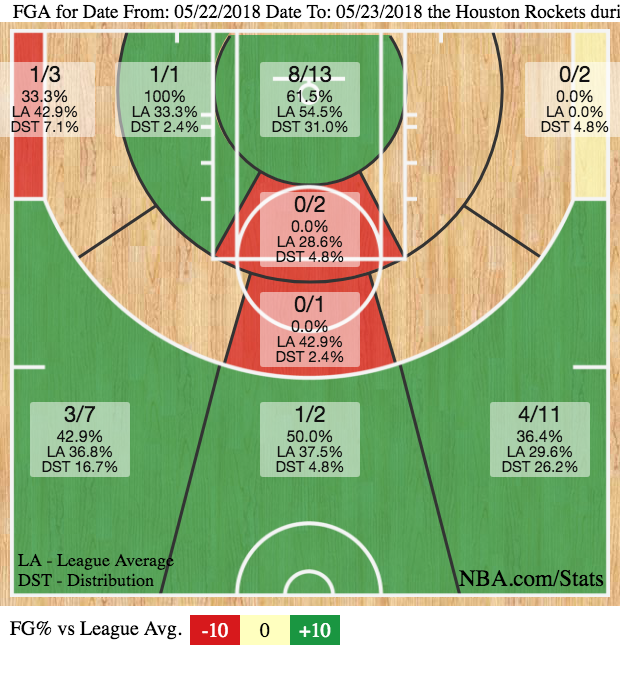 The combination of Paul-Harden-Eric Gordon-Trevor Ariza-Tucker was +8 in 20 minutes of action, and held Golden State to just 0.93 points per possession. That group rebounded 83 percent of Golden State’s misses, too, thanks to Tucker eating every rebound in sight.

Tucker snagged 16 rebounds (four on offense) in Game 4, including seven in the fourth quarter; it’s one of only three games in his career — regular season or playoffs — that Tucker has recorded at least 15 rebounds.

In the closing minutes of tight games, the ball belongs to Tucker, too. There have been nine minutes of ‘clutch’ basketball in this series — five or fewer minutes left in the game, score within five points. Tucker has seven rebounds in those nine minutes — and a defensive rebound rate of 45.5 percent (25.6 per 100 possessions).

P.J. Tucker: Help Me Help You

Tucker’s primary defensive assignment has been Draymond Green. Green isn’t a great scoring threat, but he’s critical to Golden State’s offense. His ability to locate cutters, reverse the ball in their vaunted split game and screen is off the chart. Basically, Green is the trigger man for a lot Golden State’s pretty motion sets, which allow Curry to get off ball.

When Green has the ball, Tucker has maniacally pressured the ball, which has caused Golden State to get into its sets later in the clock.

As a help defender, Tucker has been masterful, too. The comparison may seem a bit trite, but this is Draymond Green-level help defense.

In the playoffs, 16.7 percent of Golden State’s field goal attempts have come with under seven seconds left on the shot clock. That’s up from 14.3 percent in the regular season. Houston’s had a massive influence on this, too.

Against the Rockets, 18 percent of Golden State’s attempts from the field have come with under seven second on the shot clock; in Games 4 and 5, that number has ballooned to 19.5 percent (11.4 percent with four or fewer seconds). On those attempts, Golden State is a combined 7-of-29, just 3-of-13 from beyond the arc (29.3 eFG%)

Houston has also taken its chances when helping off of Green, Kevon Looney, Jordan Bell and Shaun Livingston — the non-shooters in Golden State’s rotation. The Warriors are notorious for being nonchalant at times with the ball. As the Rockets have dialed up the pressure, the Dubs have cracked to some extent — 17.8 turnovers per 100 possessions over the last two games. (13.3 turnovers per 100 possession in the playoffs)

With Houston switching so frequently, though, Tucker has had a crack on just about everyone; according to the league’s tracking data, Curry and Thompson are a combined 3-of-14 (21.4 FG%) with Tucker as the primary defender.

Does Any Of this Matter?

For big chunks of this series, things have gone according to Houston’s plan. Thursday’s night epic home court win is woefully bittersweet, though, like a plum gone bad.

After throwing down another epic playoff performance, Chris Paul came up lame in the final seconds — yet another hamstring injury. Paul’s expression — borderline catatonic — as the game played out with him on the bench seemed to forecast the worst. Is CP3 done for the 2018 playoffs? Is this really happening again, just as things got really good?

Following the game, Paul was mostly mum, but seemed to imply that he will try to play in Game 6. With only a travel day before that, though, a quick return is ambitious. Maybe he could try to go again in Game 7? Regardless of Paul’s health, I’d bet the farm that the Dubs win Game 6 at home.

This is a huge bummer; right now, this should be CP3’s moment. Instead we are left with uncertainty, and it feels like ominous news is on the horizon. There truly is no justice in this world. If Paul can’t go, this series is a wrap. (Must say: The Warriors winning in seven with Paul hurt, and then mauling Boston/Cleveland in 4-5 games in the Finals would be *peak* Golden State.)

For now, though, Houston lives to fight another day; getting to this point is already an accomplishment. It’s a day-to-day process in the postseason; each 48-hour window between games feels like a much-needed breath of fresh air. So in the meantime, we will celebrate those who deserve praise. It’s P.J. Tucker and this Houston defense’s moment in the sun.