When we found out that another professional sports team was headed to North Carolina, SportsChannel8 was thrilled; we pride ourselves on covering every team in the state, including football teams that play inside of old hockey stadiums. For the grand opening of the Triangle Torch — our state’s newest team — we sent junior reporter Trey Walker out to the game to get the scoop.

Take it away, Trey… 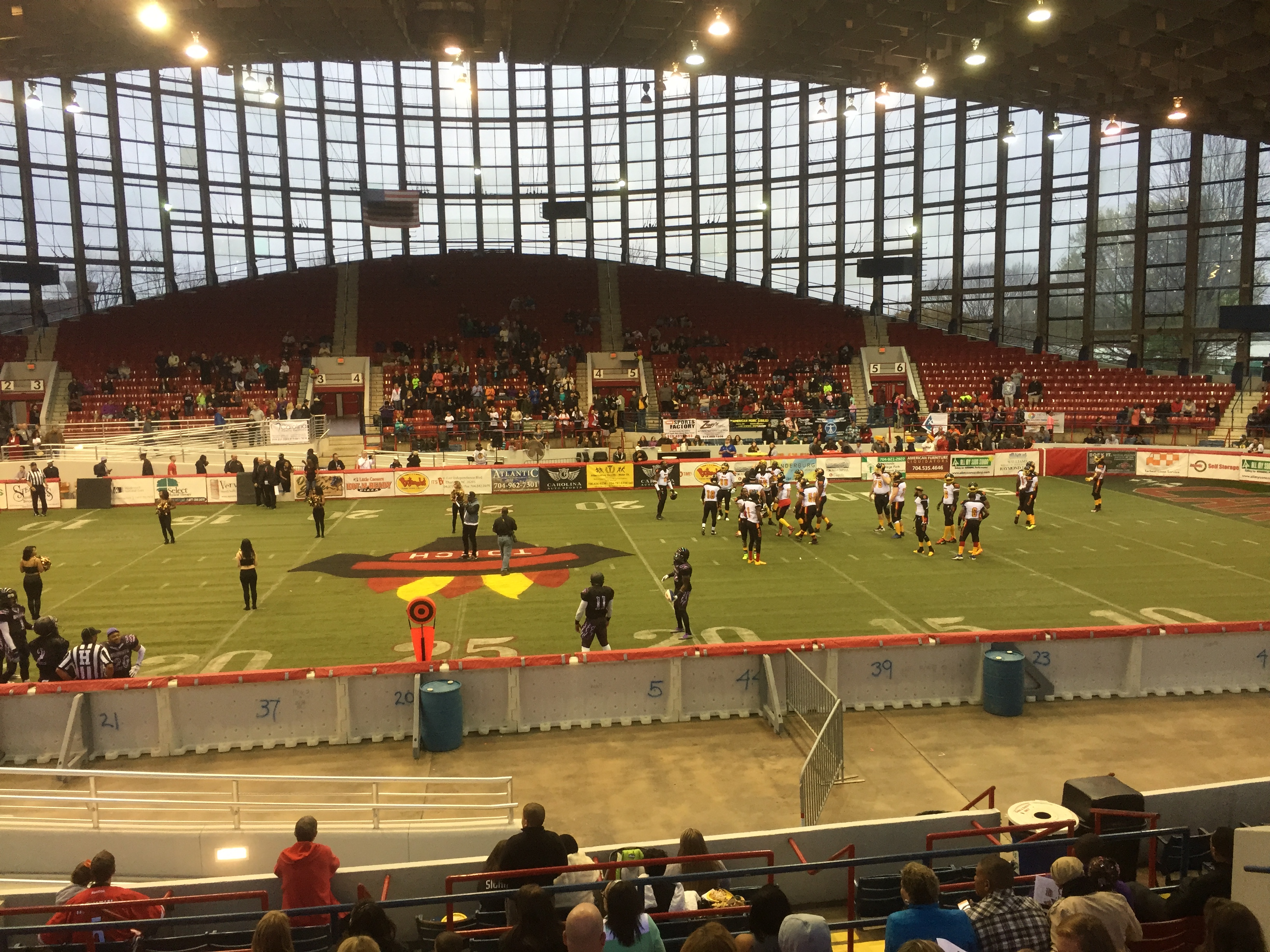 Triangle natives flocked to the NC State Fairgrounds a few Sunday afternoons ago to catch the area’s newest sports franchise, the Triangle Torch.

The Torch join an elite level of professional sports in North Carolina: the Panthers, Hornets, Hurricanes, Railhawks — plus all of our awesome minor league baseball and more.

In their season opener, the Torch cruised to victory in bold fashion, topping the Winston-Salem Wildcats 53-33.  Star receiver Antonio Allen reeled in two touchdowns in the first half to push the Torch lead out to 16-6 before intermission. After the break, Allen was benched for the rest of the game with an apparent injury. As it turns out, playing football on a 50-yard-field roped with hockey boards as boundary lines isn’t super safe. Multiple kicks had balls banging off panels at the top of both ends of the stadium.

But hard hits, backflips, and onside kicks —yes, this is a thing that happened — kept fans enthralled in the game, including the group of NC State students in the front row, who truly seemed to be having a grand time.

Sunday night rechristened what was once a treasured tradition in the area: J.S. Dorton Arena will be the home arena during competition this season. Prior to the Torch, Dorton Arena was the hot bed for successful indoor football teams like the Carolina Cobras and the Raleigh Rebels. Plus, it was kind of cool to watch football being played in the same spot where Billy Cunningham and Gene Littles used to roast fools during the ABA days of the Carolina Cougars. 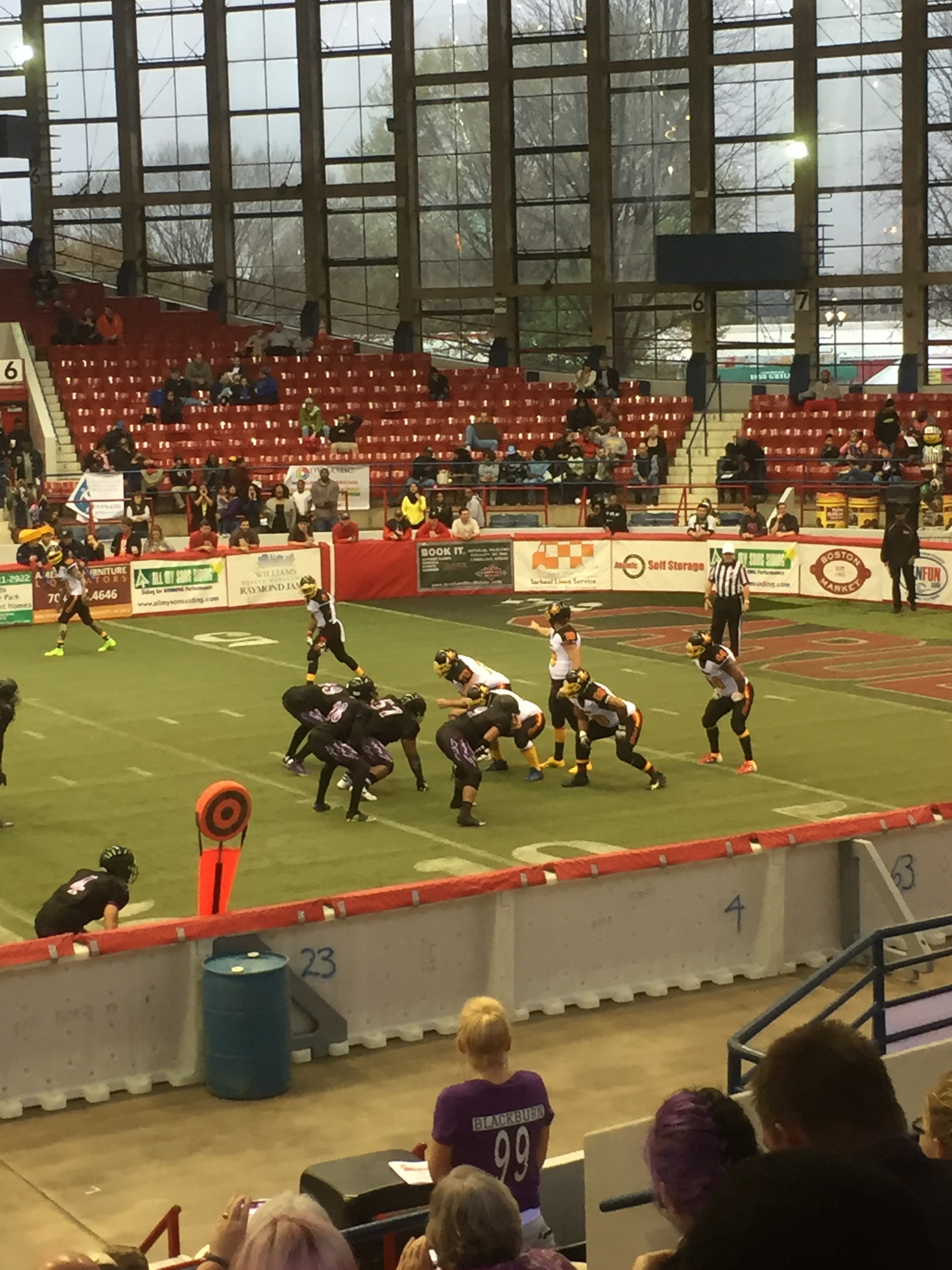 Dorton was, as usual, not without its old charms, too. For what seemed like the majority of the second half, there were minor clock/scoreboard issues. Who doesn’t enjoy sports with some confusion?

Professional football made its return to the area when a local businessman George Sutphen dreamed of creating a team closer to his home after he was continually having to travel many hours to see his son, Garret (the team’s quarterback, who played collegiately at UNC Pembroke), compete for a team out of the state. He wanted to see his son compete in his hometown and change culture in the Triangle. This team will compete in the Northern Division of the American Indoor Football League.

Also, for the enterprising business owner, if you’d like to get naming rights to the field, it’ll only cost you a cool $20,000: 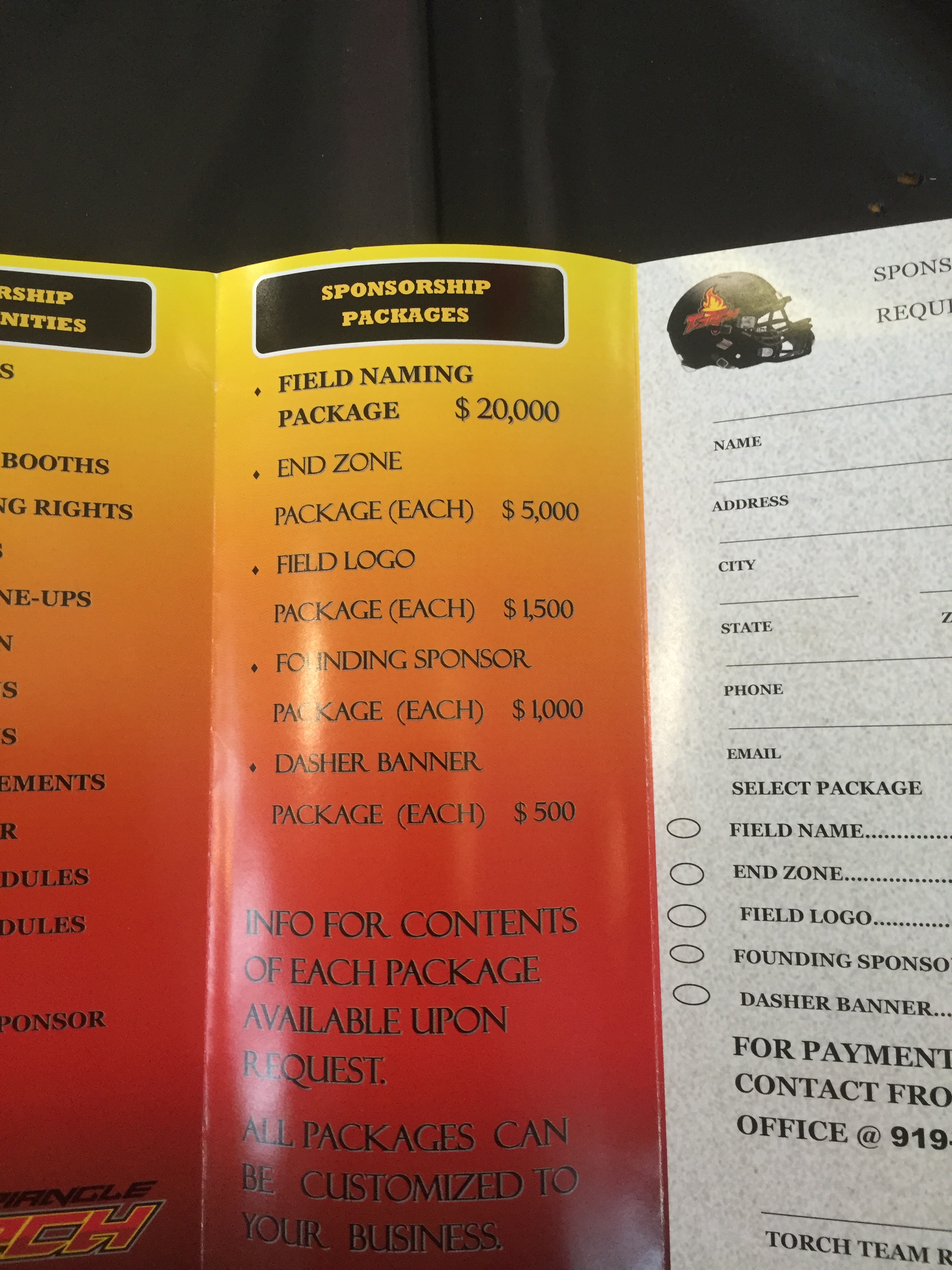 Cash Renames Everything Around Me #WuTang

After scorching Winston-Salem, the Torch fell in their next game — also at home — against Lehigh Valley Steelhawks, which raises an important question: what is a Steelhawk? More importantly, though, they return home, to Dorton Arena, on April 24th for a matchup with the Penn Capitals; check here for more details. Tickets are are cheap, yo.