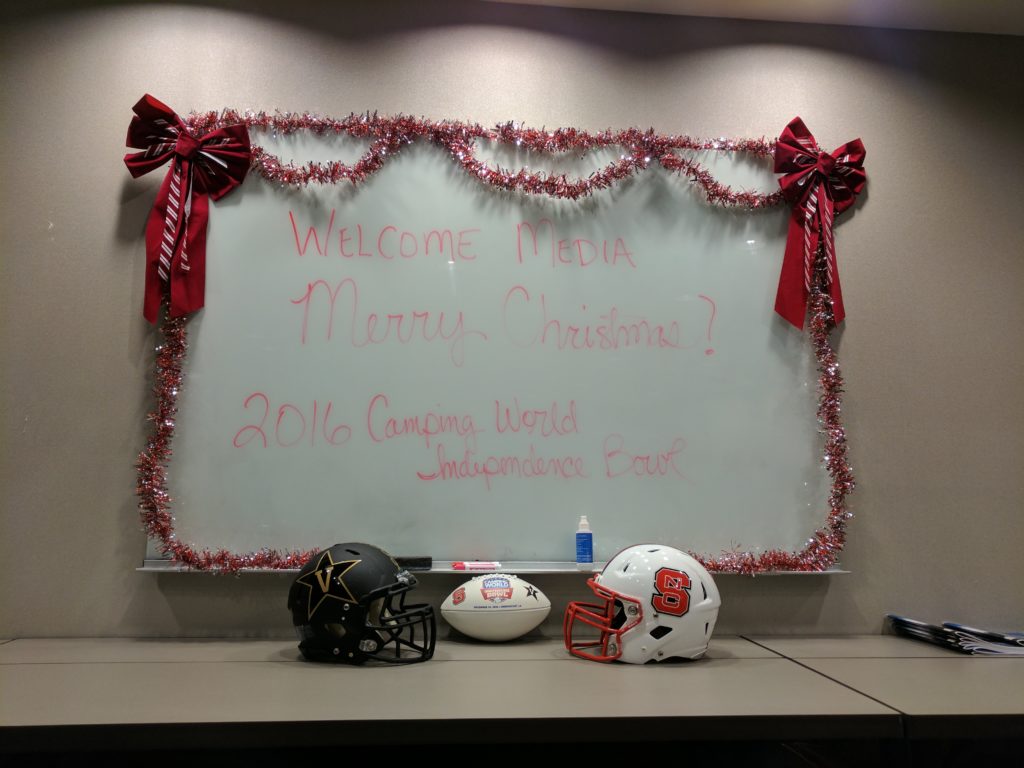 In early December, sports reporters start to get a clearer picture of where they’ll be headed for bowl season. In the Triangle, this often boils down to one main mantra: “please, God, not Shreveport.”

It’s nothing against the city personally–most of the folks hoping to avoid it have never actually visited northwest Louisiana. The game’s reputation has been sullied (for North Carolinians, at least) by a combination of factors. Partly it’s that the game is now the day after Christmas. Partly it’s he distance/travel. Partly it’s that the game is a second tier bowl pick for the ACC and SEC, meaning you’re getting two teams who probably played .500 ball during the season (to wit: NC State (6-6) and Vanderbilt (6-6)). And partly, I think, it’s because people still remember it as the Poulan Weed-Eater Independence Bowl, which, for a time, seemed to be the premier example of ridiculous bowl names due to sponsor.

But, if you’re someone who is merely interested in watching two teams play a football game, and would like to see a different part of the country, and doesn’t mind traveling (or being away from family) during Christmas AND can find a way to kill time as long as there is a casino (or, in the case of Shreveport/Bossier City, multiple casinos), well, then the Independence Bowl can be a great fit. 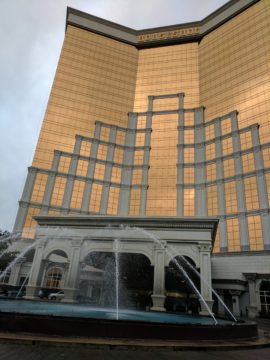 your hotel room is free! If you lose enough at the tables.

I had thought it might be a good idea (especially for someone who could use all the divine karma he can amass) to do something charitable on Christmas Day. The NC State team, for example, took some time out of their busy practice schedule to put in time at a homeless shelter. But with the lack of Uber in Shreveport making transportation exceedingly difficult, (and, if we’re being honest, because there was a casino parked behind my hotel) my will to to do good was quickly sapped.

Sooooo, yes, I’ll always remember 2016 as The Christmas I Spent In The Casino. There were NBA and NFL games to keep me distracted, free drinks to keep me around, and enough low stakes tables that I could slowly whittle away money. Some notes from a casino Christmas:

-gambling snuck in Louisiana (and other parts of the country not names Las Vegas and Atlantic City) by technically having the casinos on boats on the river, not in buildings. But the boats are designed to feel like part of the hotel their docked to in order to provide a seamless experience for guests. Which is why, after sitting at a Mississippi Stud table for an hour I ignorantly asked the dealer, “Hey, what’s in that boat I saw from my room window docked behind the hotel?” she laughed and informed me, “That’s the casino, honey, we’re on it.”

-from that I learned that at times the river gets so high that the launching ramp to the boat is at a considerable incline–the Horseshoe has had to use golf carts to ferry people to the boat and back. Also 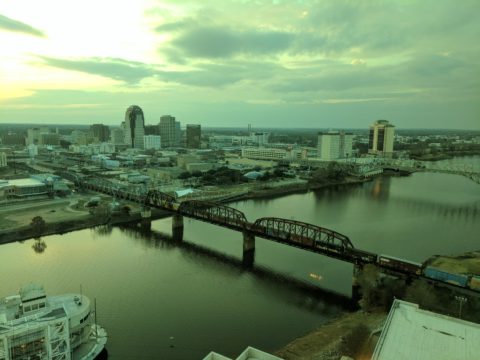 learned that while the boats no longer have to pull away from the docks at certain intervals to prove their autonomy, they do have to maintain all regularly inspected features of a functioning vessel–life jackets, working motor, a licensed captain, etc. I can’t imagine a situation where a riverboat casino would even need to make an emergency launch and leave the dock but I’m hoping I’m on board if it ever happens just to see it go down.

-In-person poker moves so much slower than online poker. The shuffling, the dealing, the 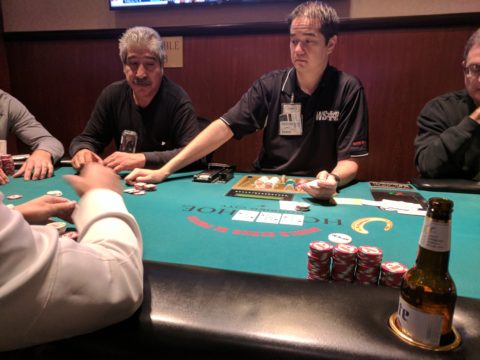 pondering….someone put a 20-second time limit on these guys.

-Casinos are fairly intimidating places for new-comers. I’m almost 40, have been to a few different casinos (but am by no means a regular), and don’t have many social inhibitions. But, man, when you approach a table of Let It Ride full of dour faces, you aren’t exactly encouraged to ask “Hey, how do you play this game?” Even with games you know the rules–like blackjack–you worry you’ll sit down and some regular will come along and tell you gruffly you’re in his seat. Or a dealer will admonish you for touching the cards with the wrong hand. After I finally found a few comfortable tables I could re-visit, it was a little easier to chuckle at the Vanderbilt students clearly suffering from casino anxiety as they arrived, walked two laps, and then settled into a corner slot machine to all play together.

-Talking to someone in team gear is always a dangerous proposition. On the one hand, it’s an easy way to enter a conversation. On the other hand, there is Jerry–an incredibly kind man donned in an Arkansas State hat and shirt sitting two seats over from me at a Stud table. No sooner had I mentioned I was in town for the bowl game when Jerry gave me his whole sports experience. Admittedly, some of it was pretty cool: he was a lifetime board member of the Independence Bowl committee who had been a pilot for them for a long time–Jerry was the guy who flew himself and other bowl reps to check out teams in November and December. He lamented how the Independence Bowl’s place in the selection process now dictated they 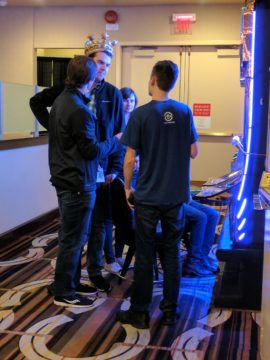 Vandy kids huddling together around a corner slot machine

have fewer teams to observe and choose from. He talked about his Arkansas State team and how well they had done in their bowl game. He even got choked up when he offered up, without prompting, that it was a tough time for him because his son had passed away a year ago this time. He had become a Duke hoops fan from his time stationed at Seymour Johnson and had seen two Final Fours with his son. In the end, I didn’t mind how much Jerry wanted to tell me (the lady sitting between us felt differently and haughtily moved to another spot at the table)–I more felt bad that I was the one Jerry had to be spilling this, too on Christmas Day.

-I thought a lot about the casino and the people filling it–both guests and employees. There is a twinge of sadness to the place: the antiseptic strip club cleaner smell mixed with cigarette smoke, the abundance of Hover-rounds, the looks from people who really need their bets to come through for more than entertainment. At the same time, the place was employing hundreds of dealers and pit bosses, all of whom seemed relatively happy, certainly enjoying work more than they would in a factory or telemarketing. Are casinos bad places? Would it be bad to have them dotting North Carolina were it legal (we currently have the two our west, designed to be a boost to the Cherokee economy)? Who knows.

Final evaluation: Christmas in Shreveport is fine, provided you weren’t forced here against your will. But I won’t be pulling for a North Carolina school to be back here next year so that I “get” to do it again. Maybe in 5 years. Maybe 10.