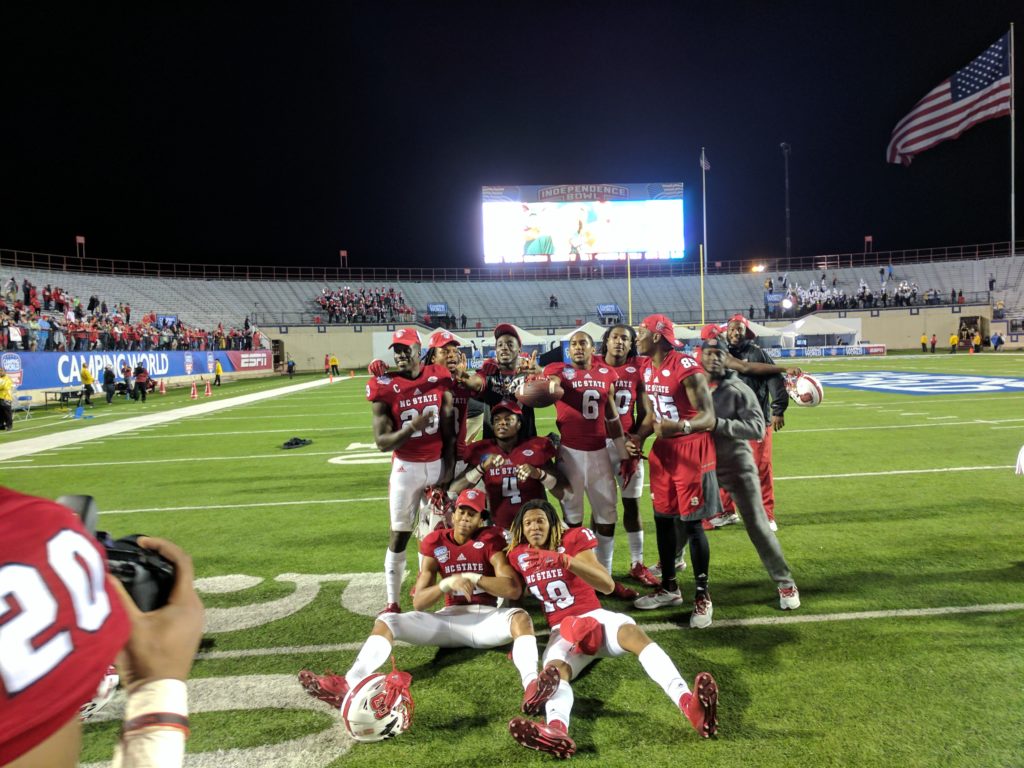 A lot of the talk around bowl season is “motivation”–not which teams have the best players or coaches or match-up advantages, but which team is “more motivated” to play in the bowl game. At times you might here commentators say a team has rallied around an interim coach, playing their hearts out hoping that he’ll get the job permanently. But under those same circumstances, you might see a team playing with a lack of motivation–deflated because their head coach opted for another job. Often times the “motivation” factor is determined by analysts AFTER the result is clear.

Having spent no time embedded deeply with any team, with access to all players 24-hours a day and with a psychiatrist at my side to point out which behaviors do or do not determine a motivated unit, I’m going to have to fall back on my simple logic that if one team beats the hell out of the other, they were just better.

That was the case with NC State in their 41-17 Independence Bowl stomping of Vanderbilt; NC State was simply the better team. They had better players, and those players did a better job than Vanderbilt’s of executing their game plan. Jaylen Samuels was the most dynamic athlete on the field (though Airius Moore’s hurdle-sack might have been the most athletic play of the game). Nyheim Hines was the fastest man on the field. Bradley Chubb might have been the baddest dude on the field. I’m not sure what their motivation was (I’ll take a stab: winning a football game as opposed to losing it), but it didn’t much matter.

Perhaps a more interesting discussion might be NC State’s motivation to be slotted in the Independence Bowl. Towards the end of the season, it looked like the final undecided bowl berths for the ACC were the Independence and Military Bowls, with Wake Forest and NC State the candidates to fill them. According to reports, NC State lobbied to play in Shreveport (and Wake Forest lobbied for the Military Bowl). Their motivation being to play an SEC opponent (but, you know, not TOO goo of an SEC opponent) in a year that their fans might not be too motivated for a bowl trip anyway. I have no idea if this is true–it’s possible the bowls picked who they picked and the schools had nothing to do with it.

But if the Wolfpack DID prefer the Independence Bowl, I like the decision (especially with the win now in hand!). It was an up-and-down year for NC State marked by close calls that left fans frustrated and losses to in-state neighbors that left fans even more frustrated. Even after a win over UNC, a section of Pack fans have their reservations about Dave Doeren. Many had likely written off the possibility of a holiday season bowl trip, regardless of whether it was in Annapolis or Shreveport. What would NC State get from a tepid fan showing at the Military Bowl and a win over Temple? Even if the crowd at the Independence Bowl was mostly family and friends of the team and staff, the Wolfpack did record an impressive win over an SEC school (yes, Vanderbilt counts), a fact Dave Doeren was keenly aware of as he mentioned several times before and after the game how it had been 15+ years since NC State had accomplished such a feat. And to be honest–and I’m not suggesting the school or its administration had done this–if anyone gives you a hard time about a less than stellar fan showing, you have built in excuses: it was the day after Christmas. it was a long way away. they weren’t bowl eligible until the end of November. It’s the freaking Independence Bowl.

I’m not worried about the future of Wolfpack fan support. I am curious about the future success of Dave Doeren. If you say you’re certain how his career will end up at NC State, I think you’re a liar. If NC State goes 10-2 next season, wins 5 Atlantic Division games and goes to the Orange Bowl next season, trust me, the fans will be motivated.

Here’s what my phone saw on Independence Bowl game day: 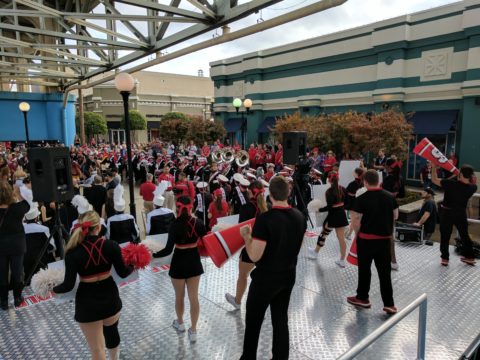 it’s the time of the year when everyone is playing hurt.

The day opened with the Independence Bowl parade/per rally, which was basically the State and Vandy cheer squads and bands marching through an outdoor mall. It was fine, but had the feeling of, “well, we brought you guys all this way, we might as well do something else besides just the game.” 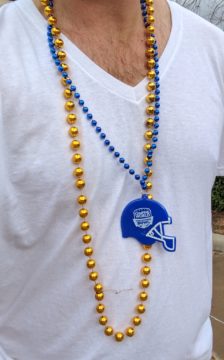 But at least they were tossing beads at the parade. I had to get the official Camping World Independence Bowl beads, but I think I confused Miss Louisiana when I tossed her my button-up shirt. 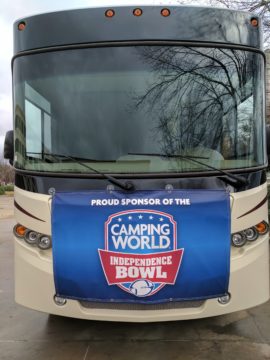 The OFFICIAL Camping World Independence Bowl camper. It was left unattended after its brief stint in the parade. But some stories will stay off-line….. 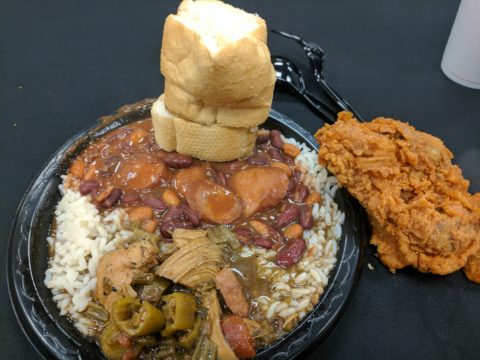 The best meal I’ve had BY FAR on the trip to this point was the pre-game fare at the Indy Bowl, from Shaver’s in Shreveport. Seasoned fried chicken and a several “stew-like dishes you weren’t sure whether to put in a bowl or on a plate. Knowing terms like “gumbo” and “jambalaya” but being a complete culinary ignoramus and having no idea exactly what those terms mean, I asked one of the caterers what these dishes were termed.

“The brown one, that’s Gumbo,” she said.

“And what about the other one, with the red beans and the rice?”

Soooo, not just a clever name. 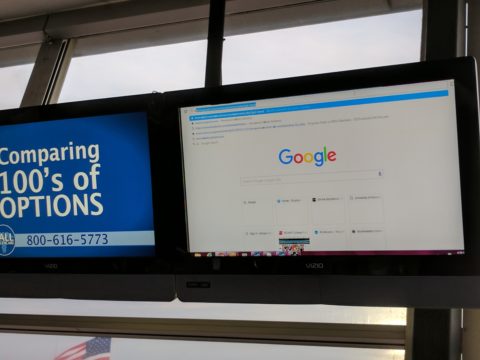 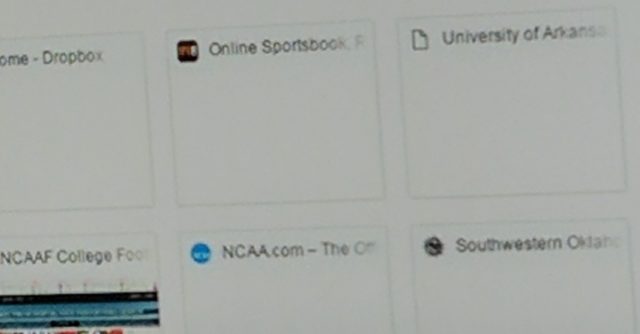 A light moment occurred when the TV displaying stats in the press box briefly began showing someone’s personal computer, first Facebook, then the general Google home page. But careful inspection revealed some interesting sites that had recently visited by whomever owned the computer. 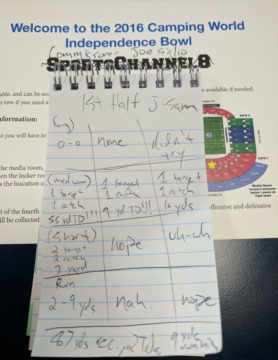 In honor of our good friend Joe Giglio of the News & Observer  and his famous yellow pad (and in honor of Jaylen Samuels 2 touchdown, first half performance) we made our best effort at a crude mini-pad chart. He added another teeder in the second half, setting an Independence Bowl record. We thought that deserved a full game pass chart, but our effort was lacking. 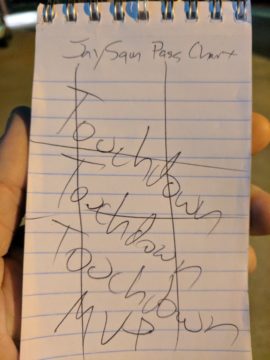 Just in case you think we’re cleverly watching the games from home (what do you think we are, ESPN announcers?), here’s an old school selfie of the midfield logo at the Independence Bowl with my shoe in it.

The media member taking footage of the NC State players during a victorious post-game press conference is a guy named Tom Pace who runs his own little media empire in Shreveport called Talk of the Town. He is one of those local treasures you discover during bowl season–an old school media vet who keeps doing things his way while still adapting in the modern world of instant video and podcasts. In the Indy Bowl press conference days before the game, he pleasantly perturbed Dave Doeren by asking endlessly about the threat of rain for the game, and how the Wolfpack would handle it. In this press conference he addressed a question to Jaylen Samuels while staring at Ryan Finley, then said he was asking Finley ABOUT Samuels but was still addressing Finley as Samuels, all while the rest of the Shreveport media silently snickered. They’ve seen this before. They’ve come to expect this from Tom. And they’ll miss the hell out of Tom when he’s gone–he’s one of those locals that, like him or not, gives a town its flavor. Rock on, Tom. Keep asking whatever the hell you want to whomever the hell you want. 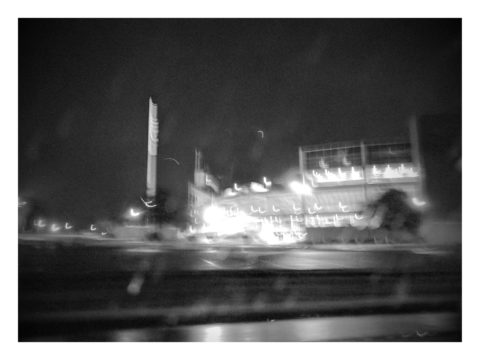 A final looks at Independence Stadium from yet another wildly over-priced and unpredictable cab ride.

Of course, when you’re in Shreveport there are always opportunities to make up for lost cab fares. So we did. 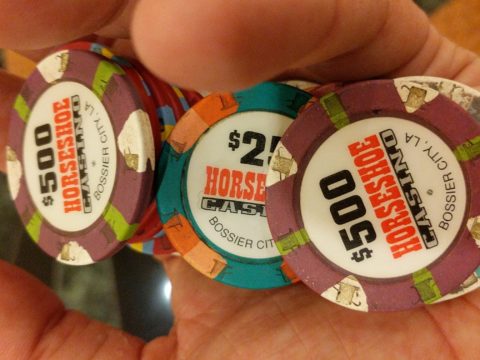 A parade. A bowl game. 4 of a kind at a Mississippi Stud table. So long, Shreveport. We enjoyed our stay.