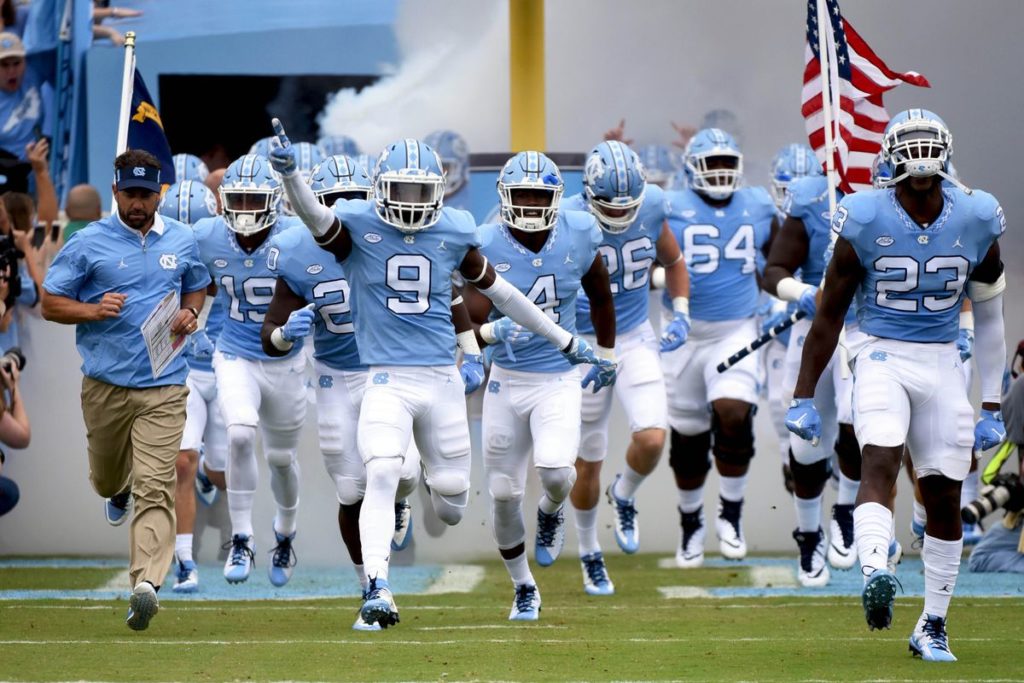 Chapel Hill High School cutting varsity football this week was a big story on the heels of comments made by UNC head coach Larry Fedora about an alleged “attack on football”. The connection between the two stories is obvious, but that doesn’t mean that WRAL’s Marilyn Payne didn’t do an excellent job in executing this connection to give some solid background on the factors at play.

As Payne outlines, a lack of participation among Chapel Hill High School upperclassmen was the driving factor in making the decision. It’s also important to note that the school isn’t “cutting football”, it’s choosing to play a Junior Varsity schedule so that their young team is playing against age-analogous competition, and they fully expect to return to a Varsity schedule next season.

The light at the end of the tunnel for Chapel Hill High School varsity football doesn’t mean there’s not a cliff just around the bend for high school sports in general.

Chapel Hill itself isn’t the best canary in the mine shaft for the problems that lay ahead for high school football because of the socioeconomic transformation the town has seen over the past 20 or so years. Sure, UNC’s success in Olympic sports is a factor in driving interest towards sports like soccer, lacrosse, field hockey and so on, but the demographics of Chapel Hill also play a role in which sports are popular among the town’s young athletes. I bet Chapel Hill High won’t have trouble fielding a tennis team this year, and I bet they’re all football fans. Count the number of football-loving kids wearing Triangle United soccer uniforms at Kenan Stadium on Saturdays for confirmation.

For the rest of the high school sports world that doesn’t have Chapel Hill-like factors at play, there are plenty of other dangers lurking.

This isn’t an exhaustive list by any means, but here’s a quick look at some of the factors at play

While Chapel Hill’s football problem may be more tied to demographics than issues like specialization, specialization will ultimately destroy scholastic sports. Here’s how it works …

Organizations like Triangle United (for example only … apologies to soccer who always gets picked on) have one reliable revenue stream: dues. With very little growth opportunity because of the finite number of soccer-playing 6-to-18 year olds in the area, organizations like United are forced to find ways to seek revenue growth among their existing customers. This means adding spring programs, and summer programs, and winter programs. And the most effective marketing tool to get customers to buy these programs is direct, implied, or even imagined fear. “If my son/daughter doesn’t sign up for these off-season workouts then they’ll be behind everyone else.”

Why is this a threat to school sports? Schools rely on multi-sport athletes to be competitive. When an AAU basketball player is traveling to tournaments in the summer and fall, they’re not at pre-season football camp. When a travel baseball player is competing on the diamond in the fall, they’re not playing soccer for their school. In some sports, especially soccer, the impact is even worse because club soccer players often aren’t allowed to even play soccer for their schools.

factor # 2: we take sports too seriously

People taking sports less seriously is bad for business, but it’s true. Sports aren’t that important. Even within the world of sports, football isn’t that important. It’s just not. No matter how many times you tell me that football is critical to the emotional development of young people because it teaches discipline and accountability and blah blah blah, it’s simply not that important.

Put yourself in the shoes of a 12th grader at Chapel Hill High School. Are you playing football knowing that you’ll never play it again after graduation? Are you giving up two weeks of your final summer before college for camp? Are you getting up at the crack of dawn to be yelled at by a coach who is only yelling at you because his coach yelled at him when he was a kid?

Growing up, some of my favorite memories were of high school sports. I wouldn’t trade them for anything. I also had a pretty cool memory of the season I was out with a broken wrist and decided to audition for a play. You know what kind of stuff that was reinforced for me when I landed the role? Discipline. Accountability. Leadership, and so on.

Not all kids have those kind of opportunities. Not all schools have plays to audition for, or music programs, or art. In some cases, football is the only option for kids to receive structure and support and even purpose. Projecting that harsh reality on situations where football is very much a recreational choice among many will ultimately make football the least desirable option in those situations.

I hope the high school coaches at Chapel Hill are having meetings to talk about how to make football a better option for 11th and 12th graders who are just looking for something to do after school to keep them in shape and to be a part of a team doing something fun. My guess is they’re talking to the 9th and 10th graders about how the 11th and 12th graders who didn’t play are pussies who are throwing away their futures and “YOU DON’T WANT TO QUIT LIKE THEM DO YOU?” between up-downs in full pads in 90 degree heat. Because that’s what their coaches would have told them back in high school.

Why aren’t kids playing high school football? Maybe it’s because kids are soft and all they want to do is play Fortnite and be on their phones all day. Or maybe it’s because colleges are becoming impossibly competitive to get into without a two-page resume of community leadership experience. Or because they have to work every day after school to contribute to their college fund, or even to help pay for food or rent or the mortgage.