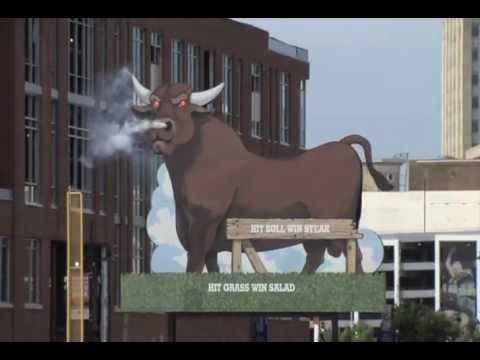 The ACC Baseball Tournament is being played at Durham Bulls Athletic Park. There is a large bull in left field of historical (and Hollywood) significance. On the bull it reads, “Hit Bull Win Steak” (and also, but less relevant, “Hit Grass Win Salad”). During minor league play, that is not just a clever credo but a house rule, as the Durham Bulls will indeed provide a steak dinner to any player–home or visiting–who bats a ball off the bull.

This challenge/reward is not in play, however, for the ACC Tournament, likely in part due to rules governing NCAA amateurism. We’re not ok with that.

During Thursday’s games, Virginia shortstop Daniel Pinero cranked a homer over the left field wall and into the famous bull, a feat chronicled delightfully by our friends at the ACC Digital Network.

It got us so fired up about the “Hit Bull Win Steak” thing, we had to do something about it.

Our first thought, of course, was to circumvent NCAA rules by offering Mr. Pinero the free steak he deserves, on us. We’re not going to go much further than that in an attempt to publicly compel a player to violate NCAA (or ACC or UVa) policy, but we’ll just say this: Daniel, have your people contact our people and we’ll make it happen. Whether it’s the Aberdeen Barn in Charlottesville or the Angus Barn in Raleigh–the people of North Carolina owe you a steak dinner, and we intend to make good on the offer.

Secondly, we thought SOMEone should get to celebrate the Bull-ball with a free meal, and who better than the Food Bank of Central and Eastern North Carolina! So we dropped a (very) small donation 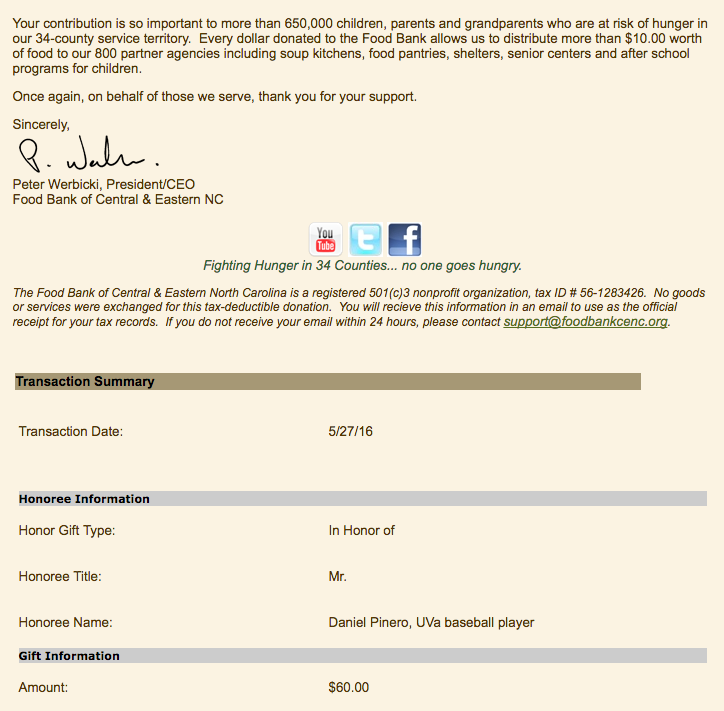 (yanno, about the cost of one steak dinner….with no wine or tip) in honor of Daniel Pinero and his bull-slaying bat. And, since we’re here, we’ll go ahead and challenge the Durham Bulls and The ACC to do the same.  And we’ll extend the offer for the duration of this week’s Tournament: any home run off the bull nets a “steak dinner” donation to the Food Bank of Central & Eastern North Carolina. “Hit Bull Beat Hunger” has kind of a nice ring to it.