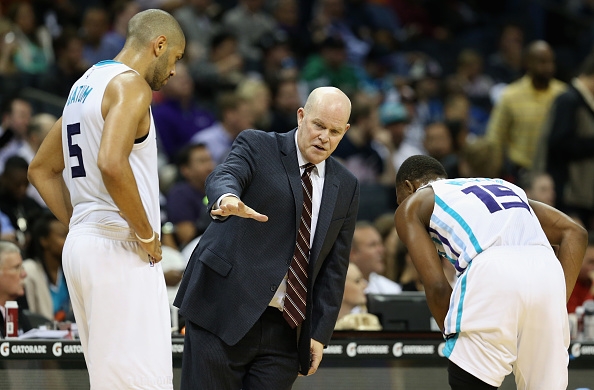 The Charlotte Hornets are 11-9 on the season. Steve Clifford’s club ranks No. 9 in the NBA in terms of net rating: +2.7 points per 100 possession. They currently stand in sixth place in the Eastern Conference, following a brutal loss at home Saturday night to the young Minnesota Timberwolves. They’ve now dropped six out of their last nine games. In the words of Pete Campbell: “Not great, Bob!”

Here’s a look at what’s on Stat Boi’s mind when it comes to the latest with the Hornets.

“So you’re telling me there’s a chance.”

The loss in Uptown on Saturday night is a tough pill to swallow for the Hornets. The T’Wolves are wildly talented and fun to watch, but this was a game Charlotte absolutely should’ve added to the win column. With under five minutes to play in the third quarter, Charlotte held a 15-point lead. With 5:13 remaining in regulation, the Hornets were up 97-88.

However, Charlotte all but had this game won with 50 second remaining, up by seven:

How improbable was tonight's victory? Down 7 without possession, Wolves had a 0.2% chance of victory. pic.twitter.com/O5DOxalqpx

They had a better than 99 percent chance of winning the game, but disaster struck, and they somehow lost: Zach LaVine, Ricky Rubio (a minor miracle) and Andrew Wiggins all hit 3-pointers in the last 40 second of the game, and with 38 second left, Kemba Walker had a rare, costly turnover that gave the Wolves life. It didn’t help that Charlotte gave up nearly 1.5 points per possession in the fourth quarter, too.

A few weeks ago on the podcast (you should listen to it!), Brenden and I talked about what we perceived to be a lack of calls for Kemba Walker. Perhaps this was because when Kemba does drive to the hoops and feels contact he feels no shame in barking at the referee for a call. Did the numbers support that belief? Well, in a word, yes.

Kemba averages 9.8 drives per game, according to the NBA’s tracking data, which ranks 13th in the league. He shoots 50 percent on these drives, which makes him neighbors with Kyrie Irving (51 percent); that’s also a more efficient figure than Russell Westbrook, who is shooting a shade under 46 percent on drives.

Charlotte’s captain is a fearless player, unafraid to mix it up amongst the trees in the lane. In the loss to Minnesota on Saturday night, Walker — who was brilliant in the second half — had a crafty, lefty finish at the basket where he used the rim to protect his shot from Karl-Anthony Towns. It was tasty.

Walker, however, is having trouble getting to the line once he makes his foray to the hoop. Despite passing out of these possessions just 29.2 percent of the time (the third smallest rate among players who average 8 or more drives per game), Walker draws few whistles — attempting just 1.9 free throws per game on drives. There are 23 players who average eight more drives per game. Kemba ranks 16th out of this group in free throws per game.

Chicago’s Jimmy Buter, who is awesome and has been the second best player in the Eastern Conference this season, averages 8.6 drives per game, but he attempts 3.7 free throws per game. Damian Lillard of the Trail Blazers — another All-Star — averages 10.3 drives per game. Portland’s supernova attempts seven shots per game within 10 feet of the basket. Kemba, on the other hand, launches 6.3 shots per game from inside 10 game. Those are similar profiles, but Lillard attempts 3.3 free throws per game — nearly 1.5 more than Kemba.

He’s added a three point shot to his arsenal; Kemba’s shooting 52.1 percent on catch-and-shoot 3-pointers, which ranks second in the NBA. This has made him a much more efficient player (23.9 PER), but if he could get a few more whistles on drives, and earn easy points from the charity stripe (career 82 percent free throw shooter), those efficiency metrics could be boosted even further. 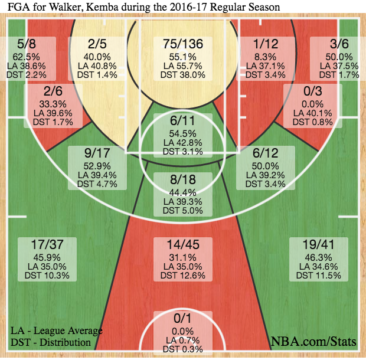 If you watch the Hornets, you know that Walker has built himself into a ruthless, crunch time scorer; that Atlanta game is still seared into my memory — what a performance. When it’s time to get a bucket, the Hornets, turn to Walker, and he usually delivers.

The NBA defines “clutch time” as the fourth quarter or overtime, with under than five minutes remaining, and neither team ahead by more than five points. According to NBA Miner, Walker has scored 62 points this season in the clutch for Charlotte — this ranks second in the NBA, behind only Oklahoma City’s star Russell Westbrook.

Kemba’s shooting an absurd 57.5 percent (23-40) in the clutch, which is freaking insane. Walker is shooting 46.5 percent from the floor this season; in crunch time, his shooting jumps 11 percent. Here’s a list of players he’s shot better than on clutch possessions:

Walker has an effective field goal rate of 65 percent in clutch time, too. The Hornets score 114.1 points per 100 possessions in the fourth quarter when Kemba is on the court, which would rank as the No. 2 offense in the NBA — behind only Golden State (duh). All of this is especially impressive when you factor in the defensive attention that Kemba receives. Charlotte lacks a true second option, which means Walker draws a crowd everywhere he goes. The Hornets could really use another scorer/creator to alleviate Kemba from some of this scoring burden.

Regardless, this guy’s pretty good, huh? He better make the damn All-Star game, which would’ve been cool to have seen in Charlotte. Thanks, Pat!

After missing the first half of November with a hamstring injury, Jeremy Lamb has returned to the lineup, and played very good basketball for the Buzz. He and Clifford don’t always see eye-to-eye, but Charlotte’s coach has leaned on Lamb to provide minutes off the bench at the wing spots, and the former UConn Husky has responded.

Over the last five games, Lamb has averaged 12.2 points and 7.6 rebounds, while shooting 48.8 percent from the field and 40 percent on 3-pointers. The highlight of this run was his monster performance in a win over New York: 18 points and 17 rebounds. Two nights later against Memphis, Lamb slapped up 21 points (on just 11 attempts), snipped two 3-pointers, and snagged nine rebounds.

During this stretch of games, Charlotte has scored five more points per 100 possessions with Lamb on the floor. Lamb and Marco Belinelli (44.3 percent on threes) have been good off the bench; if the Hornets want to stay afloat in the East, they’ll need continuous sturdy play from their two backup wings.