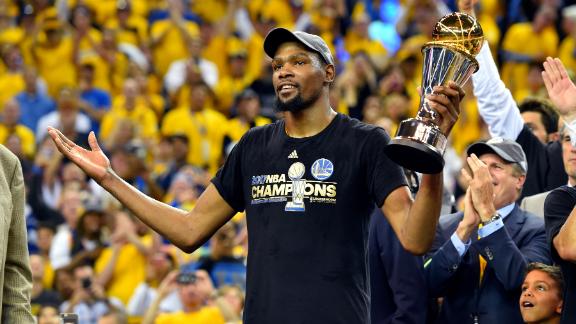 Kevin Durant’s offseason move to the Warriors and subsequent World Championship squarely puts all NBA appreciators in two distinct camps: those who cover or cheer for teams that can put together a roster like Golden State’s, and those who cover or cheer for teams that can’t. That’s all it comes down to, because at the heart of the discussion around “super teams” and the right and wrong path for athletes to take in their careers is the undeniable fact that people can, and should, do what they want to do.

Aside from the fact that Durant’s decision to join an established powerhouse in hopes of winning a title isn’t unique to Durant in the slightest, it’s a wrong-headed way to look at the situation.

We get it right sometimes, which is curious when you start to consider the different factors in play that provide context to each of these decisions. Just a week ago, sports fans everywhere rightfully celebrated Pitt’s clearance to allow Cam Johnson to leave the Panthers and join the national champion UNC Tar Heels. Now Johnson is hardly a player of the year candidate that will make next year’s Heels unbeatable, but still, it’s a player choosing to leave a very bad team to join a very good one. Is he soft? Is he taking shortcuts? We don’t ask those questions because he’s an amateur, whereas Durant is a professional. But does a paycheck change the rules about how to win a championship?

What about when these superstars aren’t even in college yet? Why is it all of a sudden “bad” again for groups of players to form package deals to be delivered to the Kentuckys and the Dukes? If the majority is so wishy-washy about their stance on these types of decisions, then why do we even care in the first place? Kevin Durant did nothing wrong, and the opinion that he did becomes even more shaky considering that the Warriors likely lose to the Cavs without him.

At the absolute lowest levels of sports, parents angle for their kids to be placed on the yellow team instead of the orange team because the yellow team “won every game” last year in a league that doesn’t even keep score yet. Why would we ever expect it to be any different at the professional level where GMs, coaches and players are paid millions of dollars to win championships?

LeBron James is the best basketball player I’ve seen in my lifetime, and Kyrie Irving is one of the best players in the NBA today. And they were no match for the Warriors. You can certainly like that or you can hate it, but how do you not embrace it? It was a remarkably entertaining series in an otherwise forgettable postseason because the Warriors were either the perfect champion or the perfect villain. If there’s anything to be mad at, be mad at the system that makes it impossible for Golden State to keep them together.