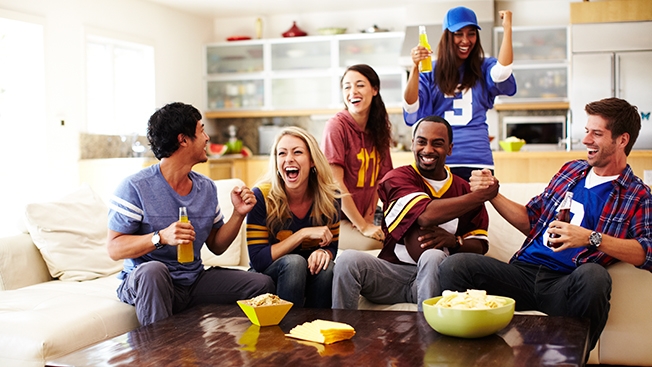 Brenden Whitted, who will be helping with with NBA content in 2016-17 and a few other things, is back with your guide to the weekend of sports TV. You can, of course, also refer to him as Research, and catch him all season long on the SportsChannel8 NBA Podcast with Stat Boi. Take it away, Brenden.

It’s been a bit of a rough week for me. I’ll leave it to you to figure out why. But, as it has through the majority of my life, sports has helped me to slowly crawl out of the doldrums of sadness, anger, and fear. This weekend will be no different, as there is a full slate of games to keep me (and whomever else may need a break from other humans’ ideologies) fully engaged and delightfully distracted. Here is your Sportsman’s Guide to the Weekend.

The Raptors visit the red hot Charlotte Hornets. Toronto was the second best Eastern Conference team essentially wire-to-wire last season. They may have some competition for that designation in the Hornets this year, though. Charlotte is 6-1 and off to the best start in franchise history, and are tied for the best record in the conference. The Hornets are top five in Net rating (the difference in the offensive and defensive ratings) and are defending at an even higher level than they did last season — they’re currently second in the league in defensive efficiency.

This game is the biggest test so far for Charlotte. DeMar DeRozen is playing at a ridiculous — if not unsustainable — rate since he signed that big offseason contract.  Someone should tell him it’s guaranteed, because he’s playing like they have to renew it after every game.  While he isn’t any more efficient from distance, he’s been bananas everywhere else — he’s made 42 FGs from 8-20 feet, no other player has more than 28 (via basketball-reference), and he’s on his way to averaging 34 points a game. Combine that with Kyle Lowry’s play, and it’ll be interesting to see who the best two players in this game may be — because Kemba Walker’s been on his own little tear, and Nic Batum has started to look more and more like one of the best small forwards in the NBA.

Not a bad way to kick off a really exciting year of college basketball.  Kansas has plenty of talent, but paramount is Josh Jackson. The freshman forward is a do-everything, crazy athletic, undeniably cerebral star poised to be one of, if not the, top pick in the upcoming NBA draft. While he may be the fresh-faced star, their backcourt of Frank Mason and (Raleigh’s own) DeVonte’ Graham is one of the best in the country. This team doesn’t feature the usual Kansas big man to feed voraciously throughout the game, so expect a more up-tempo Bill Self team.

Indiana’s recruiting class may not have any stars like Jackson, but two returning players will keep them in the hunt for the Big 10 title all season. Remember the name OG Anunoby, he came on strong at the end of last season as an extremely athletic wing player. His offense lagged behind, but he could have left last season for the NBA. Instead, he came back and worked on his offense. From all accounts, he has developed a three-pointer to go along with lockdown defense.  I’m drooling for the times that he and Jackson go head up. Big man Thomas Bryant is 6’10 260 pounds of extremely raw talent. He’s got a deceptively high motor and lives on the offensive glass.  He still has room to improve on his post moves, but his 7’5 wingspan will make it difficult for KU to score in the paint.

A light college football schedule means I can settle in and really enjoy two men beating one another with their fists. Sometimes watching good old-fashioned violence is exactly what the doctor ordered. CATHARTIC.

Luis Ortiz is the big name heading into this fight.  If he can get through Scott, the heavyweight world will be his oyster. He has been rumored to be in talks with Anthony Joshua, Wladmir Klitschko, and Deontay Wilder. Ortiz is big (6’4 235ish pounds) and hits like it; he has 22 Kos in his 25 fights. He is also yet to taste defeat.

Also, we’re guessing that Wilder will be on the mend for a while after whatever the hell this was. Prayers up.

While Scott is largely considered a tune-up fight, Scott’s considered a better boxer. The question is, can he keep Ortiz off of him and outpoint the fighter nicknamed King Kong? Most analysts don’t think so, but with heavyweights, there’s a good chance this ends early. And really, who doesn’t enjoy a good KO?

Sweet, a Pac 12 game that may actually end before church service starts Sunday morning! Washington just got in the top four, and of course they face one of the toughest the conference has to offer in USC. When they beat Oregon and Stanford, the thinking was they had solidified their resume. Sadly, both of those teams have underwhelmed. If The Huskies have any chance of making The Big Dance, they need a win over a big time opponent.  Their star QB, Jake Browning (34 Tds/3 INTs) will need to continue his stellar play, too. In what amounts to an early game with all eyes on them, they need to make a statement to the Playoff Committee. Washington has beaten the last three Power 5 teams that have visited them by an average of over 30 points. It’s not very hospitable, but an extremely effective welcome mat.

USC takes on Washington at a time where they have officially lost leading sacker, Joe Mathis, for the season. They are also riding a five-game winning streak. Redshirt freshman Sam Darnold has been an improvement over original starter Max Browne. His competent play complements Ronald Jones III who is coming off an insane 171 yard, four touchdown performance against the Oregon Ducks.  They’ll need an equally dynamic performance to keep up with the Huskies’ high-powered offense.

The Panthers are on a two-game winning streak…ok, that is the least amount of games to even qualify for “streak” but I’m gunning for optimism these days. The team’s defense is finally getting pressure without blitzing; over the last two weeks, they lead the League in sacks. The increase in defensive line pressure has meant less weight on the beleaguered secondary. They found a way to win in LA, but this will be their best competition since their bye week.  Lose here and they may very well lose the season, as they hang on to remain relevant in the wildcard debate.

The Chiefs are the same rock solid team that they’ve always been; using their defense to crush teams and their middling offense to ice games late. Alex Smith returns from the injured list (concussion). The Chief’s pass rush isn’t as vaunted as in years past (they rank near the bottom of the League in sacks) but they are first in the NFL in INTs.  If Cam Newton doesn’t take care of the ball, the Panthers may be able to kiss the postseason goodbye—in November. Ouch.

The 4 o’clock slate of games is pretty nondescript, but the Sunday night game matches two old foes. This won’t be for a Super Bowl, and there is no Marshawn Lynch to NOT get the ball on the goal line, but both of these franchises have done a ton of winning. Expect fireworks as the best of the NFC West and AFC East square off. The Seattle defense is once again its stingy self, surrendering the third fewest points of any team in the League. It’ll be a joy to see how they try to combat a New England offense that has the 6th most points of any team in the NFL.

The Patriots defense has surrendered the second fewest points, while the Seattle offense looks to have found their form with the re-emergence of Jimmy Graham. I wonder how Rob Gronkowski will take Tight End challenge. We wonder a lot of things about Gronk.

Enjoy the sports this weekend, ladies and gentlemen.  I can almost assure you it’s better than whatever you had planned. And best yet, if you time your nap right, you won’t have to talk to anyone. And really, isn’t that a #LifeGoal? He said, talking to himself.