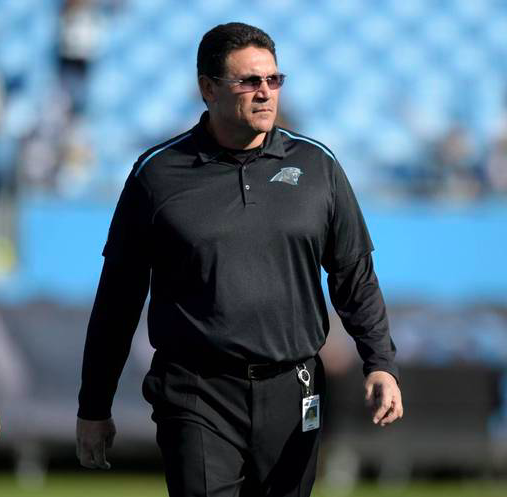 Ron Rivera won two NFL Coach of the Year awards and isn’t even a year removed from the best season in franchise history. None of that has anything to do with his future in Charlotte. He’s a very good NFL football coach, and from every report that we’ve ever read, he’s a pretty good guy too. He’s just a terrible fit for this franchise right now, and last night’s blowout loss in Seattle is probably the beginning of the end for him in Carolina.

The 4th and 1 punt last weekend against Oakland was more of an epidemic running rampant through the ranks of NFL head coaches and in no way is Rivera-specific, but it served as a perfect illustration of why the franchise needs to go away from these old school prototypical head coaches. There is no number-crunching in that situation. There’s no decision chart. There’s only the need to realize that you have a freaking tank under center and you let him go make plays to win you football games. That type of thinking is so unheard of in the NFL, but if you have a guy in charge who’d rather calculate percentages than trust the MVP to go be the MVP, what are we even doing here?

There were so many signs last night against Seattle that the team has lost interest in competing that it seems silly to focus on one decision, but how do you not talk about the one series/one play (we’ll never know how long Cam would have been benched) suspension? All over a freaking dress shirt and neck tie. And here’s why it matters … Carolina is a personality team. They’re at their best when they are loose and having fun. That’s not a Cam thing, that’s a Carolina Panthers thing. Kevin Greene. Wesley Walls. Jake Delhomme. Steve Smith. The Panthers have been successful when big personalities are allowed to be big personalities. Now we have a coach who wants to bench the league’s MVP for not wearing a neck tie to send the message that he’s in charge and no one gets fair treatment?

Again, this isn’t anti-Rivera in any way. He’ll go somewhere else and win a lot of football games, just like John Fox did. But if you’re the Carolina Panthers and you have Cam Newton as your team’s heart and soul, you can’t keep plugging these cookie-cutter NFL coaches into the big corner office. It almost doesn’t even matter who the head coach is as long as they reflect and enhance the team’s personality instead of squashing it. You don’t think you could call up your pick of coordinators and say “come coach Cam Newton” or “come coach Luke Kuechly”? Rivera is simply in the way right now. He feels like a human restrictor plate.

Let this team breathe. You know what Carolina needs? One word. Four letters.

Make this happen for the kids, Jerry.