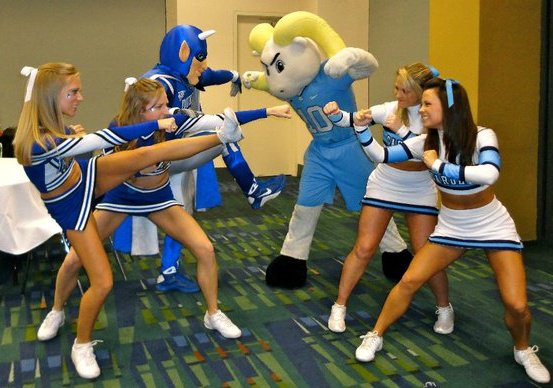 Have you always wanted to be a sportswriter? Now you can write your own preview for the UNC-Duke basketball game with your very own SportsChannel8 UNC-Duke Preview Mad Lib! Just gather some of your friends, fill in the blanks on the preview story (but don’t read the article–no cheating, UNC fans!) and then read it back for an insightful look at how this game might play out.

Use the text below or download a printable version here: UNC-Duke Mad Lib

For North Carolina, the key to the game will likely be ___________ (something basketball related) as they’ve been inconsistent with that at times this season. ____________ (current UNC player) needs to continue to play well at both ends of the floor, while I’m expecting ________ (another UNC player) to have a big game based on some of the matchups he’s likely to see. But don’t forget–they’re playing in Cameron; you know the Crazies are going to be _________ (adjective), and you have to wonder if that’s going to rattle ____________ (UNC freshman or Nate Britt). Although I expect we’ll see a few ___________ (southern colloquial term or phrase) from Roy Williams on the sidelines, he knows how to handle himself in these situations, making the coaching match-up a relative toss-up.

For Duke, some of their losses this season can be explained by injury, but what’s really been off is their __________ (something basketball related) and they’re not going to beat UNC without a good game in that area. In order to have a good shot at winning,  __________ (current Duke player) has to stay healthy first and foremost–they need him on the floor. The good news for Duke is they don’t have to worry about falling behind because they have shooters who can make up the difference in a hurry–if you’re a Blue Devil fan it would be nice to see ________ (another Duke player) get it going early and keep it going all game. And there’s the wild card from the Duke bench–with all the different lineups they’ve used and personnel changes they’ve had on the floor and on the sidelines, I wouldn’t put it past Coach K to _____________ (something outrageous)

Print out multiple copies and make as many previews as your heart desires. Is this cheesy? Yes. Is it better than cheer sheets? Absolutely.