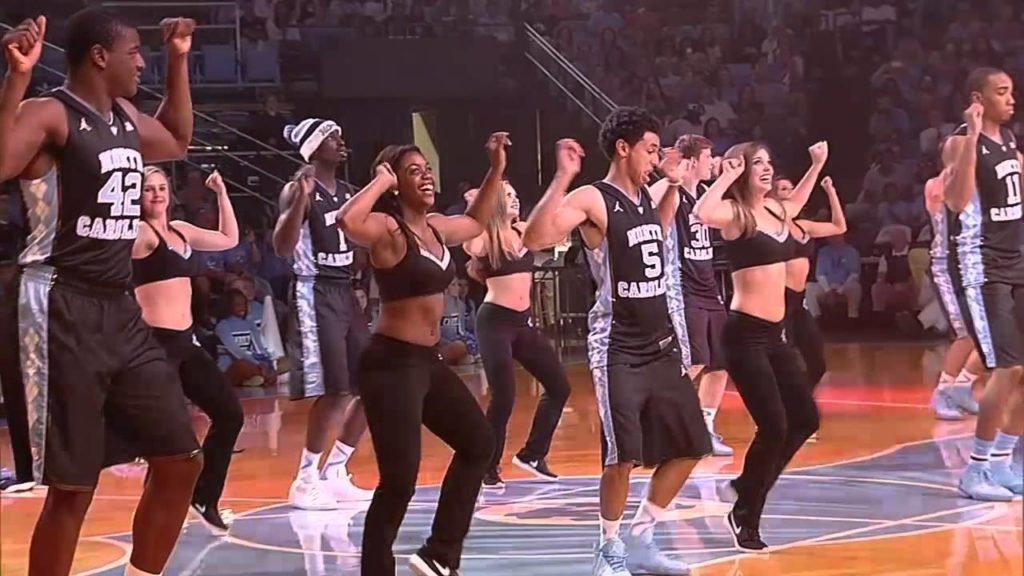 In October, the North Carolina Men’s Basketball program announced the team would be wearing alternate black uniforms for the team’s December matchup with UCLA. North Carolina has broken out the occasional alternate uniform over the past several seasons, which have ranged from timeless throwbacks to KILL IT WITH FIRE.

The black jerseys were different. For one, the design was virtually the same as their base uniforms. Same font. Same argyle down the side. Just black.

Get a closer look at new @Jumpman23 Black & Carolina Blue uniforms @UNC_Basketball will wear vs. UCLA on December 19 http://t.co/6XvMLG84N5

The basketball program turned the uniform unveiling into an event, then followed up by featuring the black uniforms during UNC’s Midnight Madness festivities. The response was overwhelmingly positive on social media and among the players.

Yet, despite the positive reception, two months later the black uniforms have yet to be seen again. This wouldn’t be that big a deal were it not emblematic of a much longer-standing trend that has plagued the Tar Heels.

North Carolina, in terms of pure inherent brand coolness, stands atop college basketball. Aside from perhaps UCLA, no other program offers the combination of tradition, historical success, iconic players, and iconic look. That coolness has been augmented by the program’s historical role as foil to their traditionally “uncool” arch-rival Duke. Duke was college basketball’s bully and North Carolina was the one program who could consistently take the bully down.

Yet, over the past five years, the near-unthinkable has happened. Duke has flipped the script and become a cooler program than UNC. Many Tar Heels may consider that sentence blasphemy but it is nonetheless true. Duke has always had a certain air of confident superiority but it was never “cool” in the way North Carolina was under Vince Carter, Rasheed Wallace or Ty Lawson. In fact the “one cool Duke player” became its own archetype — a legacy shared by Grant Hill, Jay Williams, and Nolan Smith among others.

Yet over the past half decade Duke has reeled in future pros by the bundle — Kyrie Irving, Austin Rivers, Jabari Parker, Jahlil Okafor, Justise Winslow, Brandon Ingram, Harry Giles and Jason Tatum. Every single one of those players traditionally align more with the archetypal Tar Heel than Blue Devil.

While much of that is owed to the rewards Coach K has reaped from his time as head coach of USA Basketball, Duke has taken smaller but not insignificant steps to refurbish their image. While Cameron Indoor will always maintain an unmistakable atmosphere of nerdish intensity, Duke has demonstrated a commitment to keeping the iconic venue modern– just take a look at these court projections at Cameron Indoor for this year’s Countdown to Craziness. The Blue Devils have also broken out alternate uniforms on a regular basis and unlike North Carolina, have not shied away from bringing back well-received throwback uniforms.

North Carolina on the other hand has trended in the other direction, opting for a stubborn conservatism with regards to the program’s image. UNC’s approach to any shift from the traditional uniforms is the most tangible example, but is in truth just the tip of the iceberg.

The game day atmosphere at the Dean Dome seems more tailored to sixty year old white-haired alums than to students or recruits. The issues with the arrangement of student seating in the lower levels have been well documented, but the reluctance of rich alumni to sacrifice seating for a more electric atmosphere keeps the “wine-and-cheese” reputation alive. Even when the program has made small changes like adding an in-house DJ, they undercut any potential modernizing effect by throwing the DJ in the middle of the loud but geographically isolated risers — which ends up looking more like a containment zone for enthusiastic fans amongst a sea of people like this.

The “uncoolness” of UNC Basketball doesn’t stop there. Midnight madness celebrations continue to eschew excitement for “good clean fun” for grandma and grandpa. This past year North Carolina brought in former Tar Heel Kenny Smith — a member of the coolest studio crew in sports and made him emcee yet another event which had the players go through dances in drag. North Carolina somehow went through three years of JP Tokoto without ever having a dunk contest at midnight madness. The Tar Heels count North Carolina native J. Cole among their fans yet they have never had the rapper perform or even attend any of the school’s midnight madness events.

Then there is the uniforms. While the black alternates drew rave reviews from current players, high school prospects, and the student body, a large portion Tar Heel fans abhorred the idea of Tar Heels in black. These lawn-adoring traditionalists consistently come back to the points that “black is not a school color” and that “why mess with perfection?”

This stubbornness is understandable on the surface — North Carolina basketball is inherently one of the coolest national brands, why pander? But in the era of social media, every facet of the program is now easily accessible to the public eye. The internet has accelerated the pace of “modern” and taking half-measures — one-off uniforms or having Kenny Smith host a Midnight Madness aimed at septuagenarians — will leave a program behind the times. This isn’t to say that North Carolina should abandon tradition. But it’s time for a large portion of Tar Heel fans — and the head honchos in the Rams Club — to let go of their death grip on the memory of the 1980s and allow the program step into the future.

Now, to be clear UNC’s reluctance to modernize the program’s image isn’t the biggest problem the school faces in recruiting one-and-done talents. The failure of North Carolina to get players to the league after a single season and Roy Williams’ reluctance to adjust his system a way that features such talents (i.e. implement more high ball screen action, move a big out of the paint to space the floor and encourage driving) are the main roadblock. The still-present cloud of possible NCAA sanctions isn’t helping either. But just because those things are playing a bigger role doesn’t mean the program’s outdated image doesn’t hurt.

North Carolina can’t get by on the coolness of their name alone, it’s past time the rest of the program caught up and embraced the future. Revamp Late Night with dunk contests and flashier intros. Do whatever it takes to get J. Cole to come and perform in a North Carolina jersey. Re-arrange student seating so it has a larger, surrounding presence in the lower bowl. Take full advantage of UNC’s connection with Jordan Brand by showing off custom Tar Heel gear.

None of those changes are extraordinarily difficult, but they all require to program to fully embrace change that is long-past due. Will that change piss off some older alumni? Yep. But this is after all a college basketball program — if either students or older alumni must get the short end of the stick, the choice should be pretty damn simple.

Breaking out the Black uniforms again this Saturday night in their prime time showdown versus Virginia is as good a place to start as any.