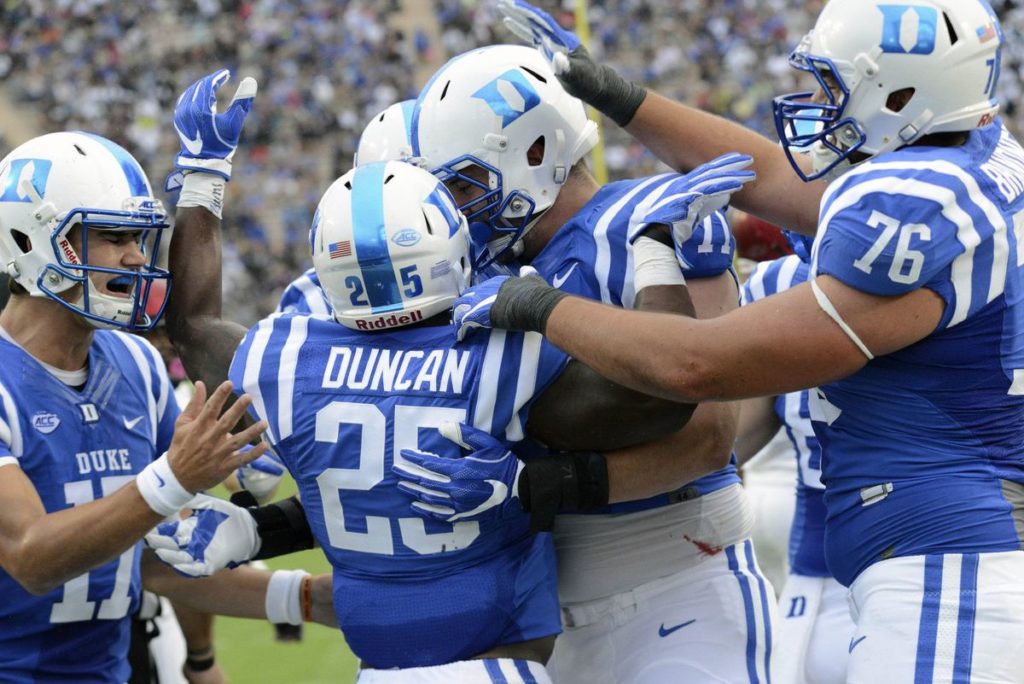 It’s college football season in North Carolina, and with that comes a slew of negativity from either fans about their own teams, or rivals mocking their opponents. We love all of our NC teams here at SportsChannel8, so we look for positives in each team’s performance.

Your team bodied the Tribe of William & Mary and carries some positive juju into next week’s highly-anticipated We Hate Carolina More Bowl with East Carolina. This is the ideal type of win to get you amped up for an in-state rivalry, one that builds confidence, shows what you’re capable of, and erases any doubt that this will totally be a great season with no collapses or catastrophes whatsoever.

Add in the fact that you can brag to your friends that the Wolfpack owns a better record than those Tar Holes after they choked away another season opener to the SEC? You’re golden, baby. Congrats on a best-case scenario week one.

A WIN! Congrats Deacs, you are on the board in the win column, and that’s something you haven’t tasted since eking out a 3-0 victory over Boston College on October 10, 2015. You didn’t lose, that’s something to celebrate!

The haters may come at you about such a low-scoring affair, or how Tulane isn’t really all that good, but you’re amongst the elite 1-0 teams in this state. Plus, as my colleague Ben Swain pointed out, you are the most efficient team in perhaps college football history as far as getting these games over with quickly. Less time in the stadium, more time in the parking lot tailgating. We approve.

SCOTTIE DOES KNOW. Football, that is. Coach Montgomery opened his career as coach of the Pirates with a drubbing of Western Carolina. Much like N.C. State, you dominated an opponent you should have dominated to set up next week’s Dowdy-Ficklen showdown.

688 yards of total offense is impressive regardless of which Carolina you’re playing, and it’s nice to see transfer QB Philip Nelson pick up six scores in his debut in purple and gold.

Plus, it was a 6 p.m. kickoff, which gave you plenty of time to down every PBR on the North Carolina coast before watching the Pirates force the Catamounts down the plank.

It’s tough to be the only Big 4 school to come away with a loss on opening weekend, especially in a game that you  should have won, but we’re here for a reason, and that’s to spin this into a win.

Mitch Trubisky probably won’t play as poorly as he did against Georgia again. After an impressive summer camp, Trubisky struggled to make throws (and didn’t get much help from his receivers on deep balls) and made some very poor decisions (see: throwing the ball away on 4th down). He’s better than that, and it will show for the rest of the year.

Also, how about those running backs, huh? 9.5 yards per carry for T.J. Logan and Elijah Hood bodes very well for the Tar Heels, especially looking at what Logan could do once he found a hole. The combination of Hood bruising defensive linemen before Logan sprints right by them will be fun to watch this year.

Finally, as much as this loss feels deflating, it bears no meaning on the outcome of UNC’s season. Let’s be honest: If you expected Carolina to make the College Football Playoff, I really have no nice words for you. This team’s goals are very much still intact: Win the Coastal, get to Charlotte, try not to draw a horrible offsides call on an onside kick.

Chin up, Carolina fans. It gets better.

Thomas who? Duke’s offense put in a showcase against the Eagles in the Durham Bowl, dropping 535 yards on NCCU in a rout. Jela Duncan made a strong early case for his Heisman campaign with 115 yards and 2 touchdowns, while Daniel Jones managed the hell out of the game with 10-15 passing for 189 yards and 2 more touchdowns.

And that’s not even mentioning the stellar defensive performance by the Blue Devils, holding NCCU to 112 total yards and a pair of field goals.