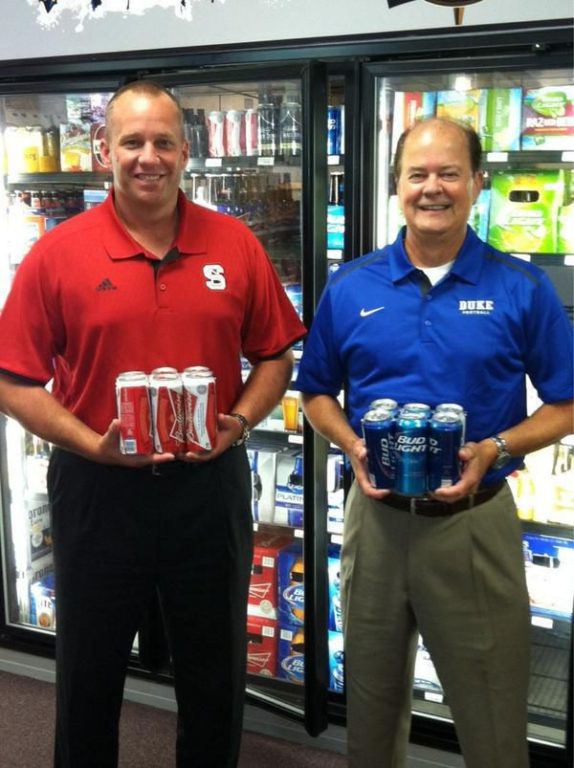 You’ll never hear anyone lauding the Big 4 of Duke, North Carolina, NC State and Wake as football powerhouses, but it’s impossible to ignore that we’re in a pretty good spot here locally. Much like the ACC as a whole, coaching talent and stability have led to a sharp increase in success on the field. All four head coaches have bowl wins on their resumes, and aside from the rumblings that you hear from most every fanbase, all four coaches are on solid ground with their bosses. This may be the closest we ever get to having each member of the Big Four be “good” at the same time, and there’s no need to look anywhere other than the sidelines for the reason behind that.

But which one is the best? Best, as always, is entirely subjective, but there are intriguing statistical trends that can at least point us closer to the right answer.

Based on winning percentage, North Carolina’ Larry Fedora is the clear winner. He’s the only Big Four coach with a winning record at his current school, enjoying the post-game handshake a little more than his opponent 62% of the time. Dave Doeren comes in 2nd with a .490 winning percentage, just ahead of Duke’s David Cutcliffe at .460. Wake’s Dave Clawson brings up the rear with a .351 winning percentage for the Deacs.

Digging a bit deeper, football fans around North Carolina certainly understand that it’s an absolute miracle for Cutcliffe to be anywhere close to a winning record. In looking at the five seasons prior to the arrival of each Big Four coach, Duke’s winning percentage was an abysmal .138, marking an improvement of .322 percentage points. Fedora also brought an improvement from the pre-Red Bull era where Butch Davis and Everett Withers combined for a 5-year winning percentage of .547 (ignoring vacated results). The winning percentages at NC State and Wake Forest both declined under their new coaches, Wake dropping .026 points and the Wolfpack dropping .057 points.

But what about before these coaches headed to Tobacco Road? NC State’s Dave Doeren cleaned up at Northern Illinois, posting a winning percentage of .852 in his two seasons leading the Huskies. Even more impressive is the comparison to post-Doeren football at NIU where they’ve only won 67% of their games, with most all of those wins coming from Doeren’s recruits. Larry Fedora won 64% of his games at Southern Miss, David Cutcliffe won 60% of his games at Ole Miss, and Dave Clawson won 52% of his games at Bowling Green. Ole Miss and Southern Miss both have declined since Cutcliffe and Fedora left, and Bowling Green has slightly improved their record post-Clawson.

All of these metrics can be easily contorted to rank the four coaches in almost any combination, but it’s a stretch to argue against Fedora and Cutcliffe being the current frontrunners in the Big Four coaching rankings. With full understanding of what Cutcliffe began with and a 3-2 head-to-head record against Fedora, it’s a fair outcome to call it a draw between the two.