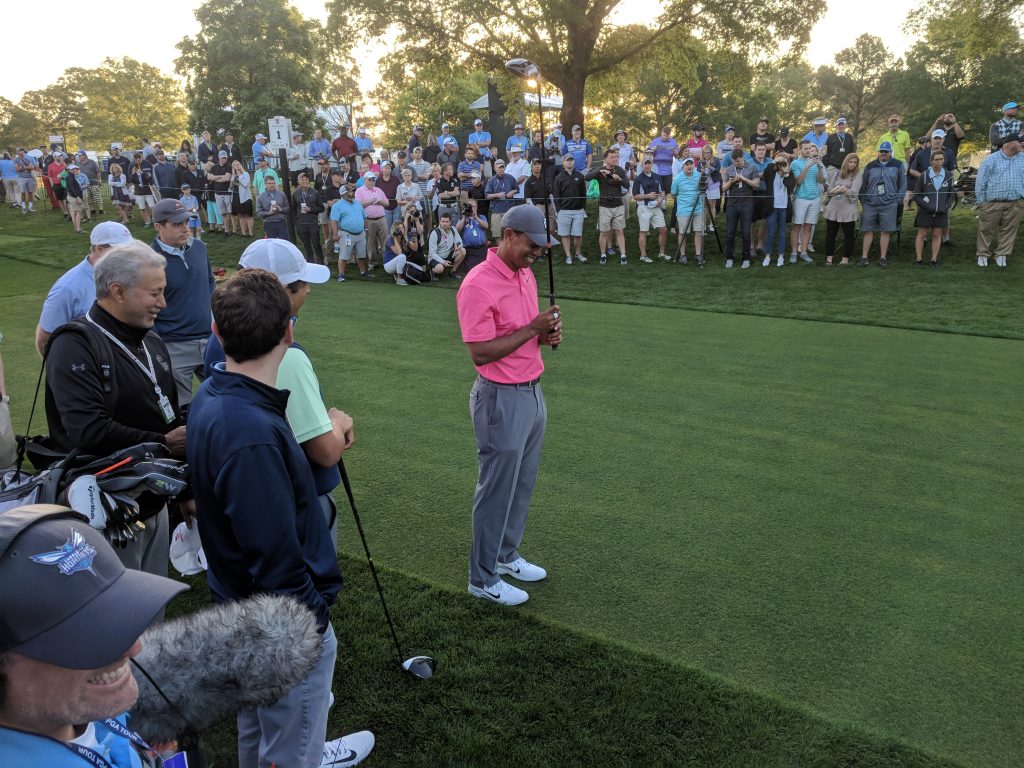 Typically, I’m not a big fan of exhibition sports. I need stakes. I need the participants to care in order for me to care about watching them.

But I might make an exception for PGA Tour Pro-Ams in the future.

The golfers are more laid back and charasmatic, knowing that this day–more than the 4 days of actual competition–is the best way to win over fans. Indeed, some golfers go so far out of the way to accomodate picture and autograph requests that you get the sense they’re thinking, “OK, if I meet every request today, would you guys mind leaving me alone for the weekend?”

And, of course, Pro-Ams bring out the Ams, specifically the famous ones. Little kids running around don’t care that a golf tournament is the backdrop–they just want to yell “Luuuuuke” when Panthers linebacker Luke Keuchly goes by or get a high five from Greg Olsen.

So while I have no idea who won the Wells Fargo Pro-Am, I can give you 8 things I saw.

So did a lot of people. The Big Cat is still the big draw, and you could tell in conversations around the course how much it means for the tournament to have him here.

2) I saw Roy Williams getting ribbed by Duke fans

Roy takes the tee, and says he saw the Duke fans politely clapping for him. pic.twitter.com/l5qdVU6T1O

A day after playing with Larry Fedora in the Chick-Fil-A Peach Bowl Challenge golf tourney, Ol’ Roy was teeing it up with PGA player Kevin Kisner (the UGA alum dressed in light blue for his playing partner). Someone shouted “Go Duke!” as Roy was in the tee box, to which the coach replied “there’s always one.”

When Roy was officially introduced, however, he noted that the Duke fans politely clapped for him.

A moment the three of them will never forget.

So, first and foremost, this was cool to witness. I happened to be on the 1st hole when Justin Thomas (who started on the 10th) came to tee. He detoured over to the crowd, where it looked like he had seen some people he knew. As it turns out, he was playing his part in the final steps of an elaborately planned out proposal, handing the soon to be bride-to-be a golf ball that said “Will you?”

The slightly annoying part was that the PGA Tour knew about it beforehand, and in carrying out the story they kind of pulled the couple away from everyone else to have the exclusive. Whatever.

But may the coolest part? The guy popping the question doesn’t even know Justin Thomas. He just slid up in those DMs to ask for a favor.

4) I saw beers being crushed early.

There has been some talk about cutting off beer sales at PGA events at a certain point. Don’t worry, the fans will just start drinking earlier.

5) I saw Phil Mickelson dropping knowledge about the Panthers roster.

Phil was the first to spot Panthers OC Norv Turner in the crowd. Phil congratulates him on the job (“He talked me into it,” Norv said of Ron Rivera), and then proceeds to rattle off Panthers WRs as if he had just been reading the depth chart. Jokes about Phil being a huge sports, um, fan aside, this was cool.

6) I saw Ron Rivera frustrated with golf, but impressed with Phil Mickelson

From yesterday–as @LukeKuechly tries to warn fans in the porch, @gregolsen88 goes over the top…and lands it on the green on 16. pic.twitter.com/p0DrPjCHUW

It wasn’t too far off from an incredible shot Bill Haas made here last August on the PGA Championship. 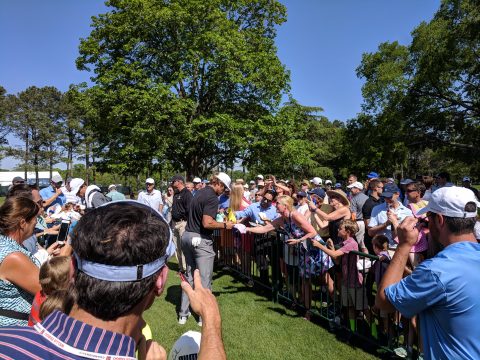 But nobody signed more than Phil. 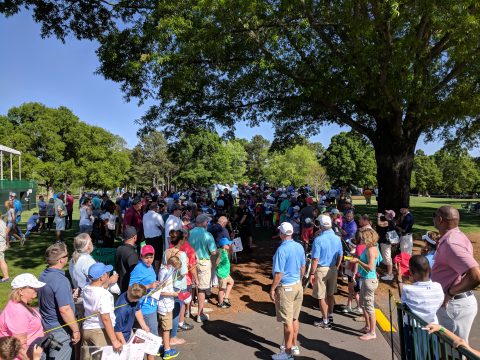 That’s the crowd waiting for Phil’s signature. And I’m telling you he took 40 minutes after playing and signed about every darn one. Respect.