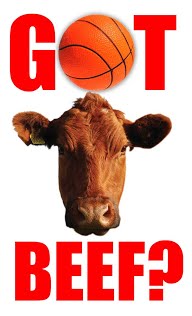 This Stephen Jackson/Andrew Wiggins/Jimmy Butler beef has already given NBA fans much-needed sustenance to traverse the desert of NBA offseason. Whether its Wiggins’ brother celebrating Butler’s potential departure, or Butler’s response, the feeling of the NBA has begun to course through the veins of many of its participants…and former players apparently aren’t immune either. Stephen Jackson (whose quality NBA career is starting to be overshadowed by his phenomenal post-career bball commentator) jumped into the fray with this performance on social media in response to the entire situation. The whole thing got me to thinking about 1) that time Cpt. Jack choked Steve Francis in a night club and 2) recent entertaining NBA beefs.

3. Bruce Bowen vs Every Wing in the League

You know how maddening of a defender you have to be for both Ray Allen AND Vince Carter to threaten you with physical violence? The Zaza Pachulia dance instructor has continued his assault on wings, albeit verbally. Bowen was recently let go from his job with the Clippers for lightly chiding Kawhi Leonard. Removing Bowen was probably a massive overreaction, and really cut the feet from under Bowen, the journalist.

Ok, so this beef never came to its full fruition. It didn’t, because as wild as Artest was, even pre-Metta World Peace wanted no parts of Mr. Wallace. That’s right; Ben Wallace was so scary that freaking Ronald William Artest Jr. decided he would rather fight everyone in the city of Detroit instead of take on Virginia Union’s Ben Wallace. Artest changed his whole life around; changed his name, got into therapy, wrote a book, won a championship, and all that was due to the mere idea of fighting Wallace. This unconsummated beef also gave us Stephen Jackson running into the stands to protect his teammate/lay cats out for the fun of it.

An important side note about the Malice in the Palace, I constantly wonder how frequently Jermaine O’Neal celebrates the condensation/banana peel that prevented him from ending this wayward trespasser’s life. I wasn’t around for the Kermit Washington and Rudy Tomjanovich incident, but I imagine that watching it in high definition wouldn’t have been good for Mr. O’Neal or the league. Players would have had a lot more than a dress code to worry about if he had hit the special punch on Knockout Kings.

1. Which Charles is in Charge… Oakley vs Barkley

Another battle of two guys that liked to consider themselves tough. It all started in the early to mid 80s, when the two would take swipes at one another in the newspaper (for the youngsters reading this, newspapers were like blogs, without the ability to update…like books, er, kindles that were delivered daily). That quickly morphed into actual skirmishes on the court which, like newspapers, were something much more mainstream a couple of decades ago. While the tussles were mostly just hard play when Oakley was with the Bulls and Barkley with the 76ers, the tone of play took a decidedly more serious turn when Oakley joined the Knicks (seriously, him and Antonio Mason on the same team?), and Barkley headed to the Suns.
In late February of the 1993-94 season, things came to a head. Oakley had only played 11 minutes before getting slapped by Barkley. Both were summarily rejected. And while the two teams had been involved in a huge brawl the season before, this fracas got decidedly more personal. Because the two teams were no longer in the same conference, Oakley made sure to extract revenge where he could, including a preseason game seasons later during Barkley’s first stint with the Rockets. The fight resulted in a suspension for both players when the season started.
A beef that lasts through multiple teams, postseason runs, and even into the preseason must be done…right?

Oakley took the ultimate vengeance during the lockout of the 1998-99 season. Chucky Brown recalls the dish best served cold, best. That’s right, as the player’s union was coming together to improve working conditions for its members, all Oakley could think about was improving the score he needed settled with the Round Mound of Rebound. Oakley finally got that return slap that had launched all of the beef between the two.
The beef continues to this day, nearly thirty years since the Helen of Troy slap delivered on Oakley. In a time of short attention spans and faux disagreements for merely acclaim and views, one beef has traversed time, space, and technology. Here is to hoping future generations will have a pair of players with such an all-encompassing dislike for one another.

Joel Embiid, I’m looking at you.