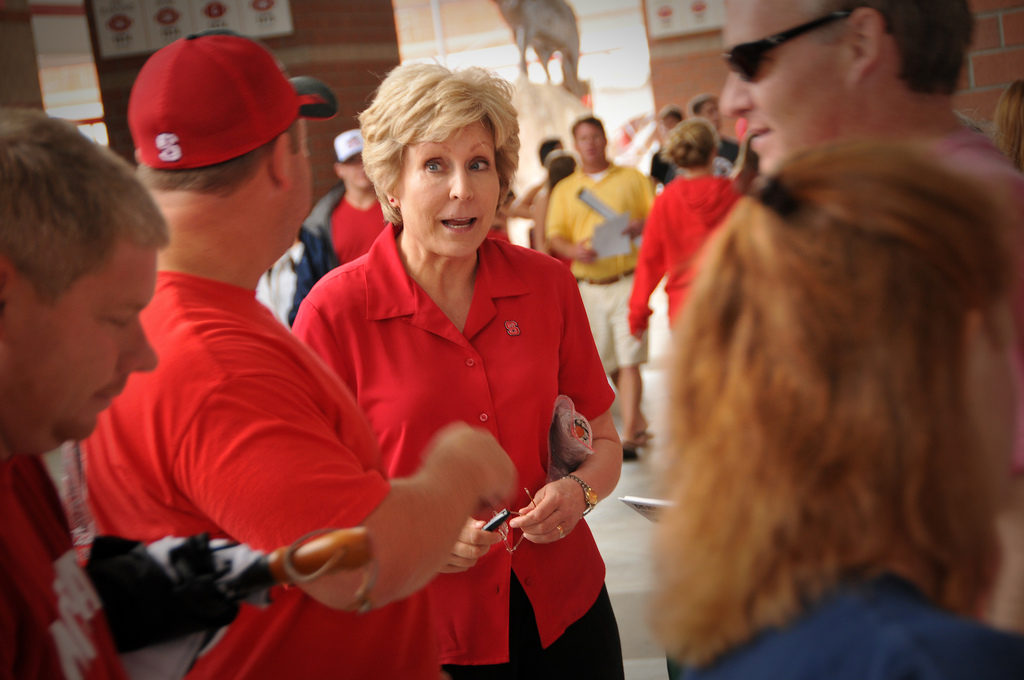 Out in the West Texas town of El Paso,

I fell in love with a Gibsonville girl

When she arrived the athletics were floundering

She turned the department into a pearl…..

As NC State’s football team prepares to face (and, likely, beat) Arizona State in the Sun Bowl, it might be a good time to take a minute and fully appreciate the job Debbie Yow has done in her time as NC State’s Athletics Director.

Let’s get a few things out of the way first: I am not looking to give her a lifetime achievement award by examining her whole career (not that she wouldn’t be deserving). Being the first female AD in ACC history at Maryland, averaging 20 wins a season for 8 years as a coach at schools that didn’t have strong women’s basketball teams when she arrived, serving as an AD for 25+ years in a college sports environment that is not easy to thrive and survive in….ALL of these things and more would be reason to extol her career. But they don’t speak specifically to the job she’s done at NC State.

Also, I fully admit that I dig Yow. I like her. I don’t know her too well on a personal level–we have met and interacted several times as I’ve held various sports media roles–but there are a few things that have always given me a personal connection to Yow.

We’re both NC natives. And while I promise I don’t refer to anyone who wasn’t born in NC as a “yankee carpetbagger,” I’ll admit, I like seeing North Carolina people do big things in North Carolina.

We’re both college dropouts. It’s not necessarily a point of pride, and she probably had more fun “partying” (her word) at ECU than I did being lazy at Davidson (and NC State…and UNC, twice), but to see someone who stumbled early succeed late….I dig that.

We both lost an older sister to cancer. Both Kay Yow and my sister Lisa were about a decade older than Debbie and I, respectively, so I know she didn’t just lose a sister, she lost a sister-mom. I’d be lying if I said something cheesy like, “every day, I try my hardest to make my sister proud.” At the same time, on the rare occasion I feel like my late sister would be proud of me, there is no more satisfying feeling. I’m betting Debbie can relate.

But, again, while those things may give me a reason to root for Yow’s success, it is not an objective measure of her job performance the past 7+ years in Raleigh. So let’s try to do that.

What do Wolfpack fans want out of an AD? I’d argue they want exactly what they’ve gotten out from Yow.

Right or wrong, “winning” in college athletics is primarily based on the football and men’s basketball programs. Yow inherited Tom O’Brien as a football coach. O’Brien was the kind of coach who quelled any fears that you might have a TERRIBLE season, but rarely inspired confidence that you might have an amazing one. Folks telling NC State fans “you should be happy with 7 wins and a bowl game in Charlotte every year” is the epitome of what they don’t want to hear.

Dave Doeren was a big name on the hiring circuit in 2012 after winning 23 games in 2 seasons at Northern Illinois, earning the Huskies an Orange Bowl invitation. Yow locked it up and got him to Raleigh quickly and quietly. While some State fans may prefer a personality that reminds them more of Jim Valvano and Lou Holtz than Herb Sendek and, well, Tom O’Brien, there’s no denying that, at the time, it was a home run hire. A few speeches like the “blue-collar school” one after a win over UNC can make up for a lack of laughs in press conferences.

After 5 seasons? It still looks like a good hire.

But what the numbers don’t show is the feeling, the vibe of the current program. When Amato and O’Brien were shown the door their football teams felt a little stale at best, maybe even starting to move backwards. While Doeren will lose some talent at the end of the season, it still feels like a program with forward momentum.

If you want to knock Yow, it won’t be easy to use football to do it. Firing O’Brien and hiring Doeren were the right calls.

On the basketball side, letting Sidney Lowe go was an easy enough call. Perhaps the biggest gripe about Yow is the coaching search that followed. Wolfpack fans wanted a splash hire and instead ended up with Mark Gottfried off the ESPN desk. (Let’s not forget that Gary Williams, whom Yow helped get nominated for the Naismith Hall of Fame, made things a little more difficult by all but calling Yow the b-word publicly)

But how did it work out? 4 straight NCAA Tournament appearances to open Gottfried’s tenure–after whiffing the previous 5 seasons–and 2 Sweet 16 appearances.  Though there were signs that Gottfried’s weaknesses might keep him from being a long term solution, a parade of high class talent signing up to come to Raleigh–plus the aforementioned NCAA runs–meant he deserved every minute of the time he was paid in Raleigh. When the Dennis Smith season stopped heading where it should, Yow rightfully pulled the plug.

Kevin Keatts was a hire similar to Dave Doeren–Yow grabbed a hot name who had great success at a lower level of competition. There were very few leaks or rumors, and she locked up Keatts when he was almost certainly getting offers from other places.

In summary, here’s what Yow has done with her two most high-profile coaching positions:

Fired Gottfried – right call, was becoming an easy call, but gave him the time he deserved based on results

Of course, while football and men’s basketball are the budget-driving sports, they are not the ONLY sports an AD oversees. Duke (golf, lacrosse), Wake (field hockey, soccer) and UNC (soccer, field hockey, lacrosse) all have calling card Olympic sport programs that compete for national titles and raise the profile of the athletic department. NC State has had theirs over the years–cross country, swimming, wrestling–but overall athletics lagged behind its ACC brethren in NC.

In the final Learfield Director Cup standings the year before Yow arrived, NC State was 89th. UNC was 7th, Duke was 10th. Even undersized Wake Forest was well ahead of the Wolfpack at 53. NCSU was one spot ahead of Brown, a few notches below Army, Navy, and (since we’re in El Paso) UTEP. That’s not where they should be.

Under Yow, traditionally strong programs like baseball and wrestling have been even stronger, and coaches who weren’t successful–in sports like softball and volleyball–were shown the door in favor of new blood.

Currently, after the Fall season, NC State is in 8th place for the Learfield Cup. That’s ahead of–you guessed it–North Carolina (10), Duke (13) and Wake Forest (19). And the Wolfpack’s points for a successful football campaign haven’t even been counted yet, meaning the Pack is likely to move up even higher.

From 89th to (currently) 8th. From trailing the rest of NC’s ACC schools to setting the pace. Wolfpack fans want to win; Yow has delivered.

NC State fans–even the ones who don’t actually believe that Mark Emmert and John Swofford take their orders directly from Chapel Hill–do NOT take kindly to the feeling that they’re getting a raw deal, be it a single call on the basketball court, an unjust bowl bid, or an NCAA ruling. Years, and in some cases evidence, of feeling like everyone from the referees to the state legislature favor their rivals in blue over the Wolfpack have created a psyche that is tough to let go of. And nothing is more frustrating than feeling like you’re getting screwed and having a feckless leader lie down and take it.

This is basically the exact opposite of how Yow has operated.

Whether it was a noble pursuit, like when Yow told the NCAA she was not accepting their denial of Braxton Beverly’s appeal, or a borderline petty (but awesome) one, like when she marched Tom Gugliotta and Chris Corchiani out as Wolfpack Legends after they had been ejected from a home game, Yow has shown that she WILL stand up for her school, her teams and her fans when called on to do so.

Pack fans may still feel, at times, that their teams didn’t get proper treatment from an NCAA committee or a bowl invitation, but Yow has given them reason to believe that she is doing everything she can to make sure NC State gets treated fairly. Did any Pack fan feel that way under Lee Fowler or Les Robinson?

Piggy-backing on #2, Wolfpack fans have come to trust Yow will go to bat for them in part because she has been very accessible and transparent. When message boards and twitter fingers are asking how a coaching search or bowl selection process is playing out, typical AD protocol is to stay mum and let final results speak for themselves.

Not Yow. She releases statements letting fans know where things stand. She replies to emails and tweets, sometimes even contentious ones. She is not afraid of criticism but also not afraid to push back if she feels its unjust.

She can also be funny, like the time someone on twitter asked when her contract was up and she replied (to paraphrase): “it’s public. Go google it.”

She reminds Wolfpack fans that, for the most part, she has the same goals they do: to win games, provide great fan experiences, and give players and coaches the tools they need to succeed.

Here’s the text of an email she sent to a group of fans who, like fans will do, emailed her after a bad loss that included Mark Gottfried suggesting after the game he didn’t care what fans thought:

Several of you as loyal fans have written regarding the loss to BC and since each email was similar in nature, I decided to respond to you as a group.

Because you are not able to impact game outcomes directly, I understand your frustration, because you depend on others to ‘right the ship.’

I also have seen the video of the post game comments made to the (The News and Observer) and want to assure you that what our fans think does matter. A lot.

At this juncture, seeing measurable/objective improvement in play is a focus and continuing to provide day to day support for our team members and coaches.

As 18- to 22-year-old athletes, this cannot be easy for them. And I understand you are disappointed regarding early season ACC game outcomes. Playing in the friendly confines of PNC for the next week should help.

Thank you for your longtime loyalty to Wolfpack Men’s Basketball. That is never taken for granted.

How many other ADs would do this? How many of her colleagues privately ask her, “Debbie, why would you waste time responding to fans who are mad after a loss?”

And maybe emails and statements and twitter replies AREN’T the right way for other ADs to operate at other schools. But at NC State, they want answers from the boss, and Yow gives them.

It’s possible Yow ends her time without any more major changes to the athletic department–Doeren and Keatts could outlast her in Raleigh. An indoor practice facility has been built and Reynolds has been renovated. It will be impossible for NCSU to make another 80-spot leap in the Director’s Cup standings, they’re too high in the standings.

Debbie Yow–winner, fighter, answerer of emails-hasn’t just been a good Athletic Director at NC State, she’s been an outstanding one.