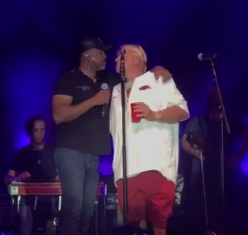 We should have known if you let the PGA Championship get this close to South Carolina (real South Carolina, not the beaches) then we’d get some drunk redneck in town for the tournament jumping on stage with some country singer. We just didn’t know it would be these two.

In case it isn’t abundantly, hideously clear, that’s living country western song John Daly and reborn country singer Darius Rucker singing Purple Rain–with a slide guitar–the combined sound of which I can only imagine had the inimitable Prince sexily rolling over in his paisley grave.

Daly, who is also a 2-time major winner and has an 8:20 tee time Thursday morning at the 99th PGA Championship at Quail Hollow in Charlotte, apparently went solo for a bit as well, taking the guitar and the lead vocals for at least parts of Bob Dylan’s Knocking on Heaven’s Door.

And shout-out to this kid who doesn’t know music existed before 1990.

If John daly singing Guns N' Roses with Darius Rucker doesn't get you hype I don't know what will pic.twitter.com/AlcwbeA1IA

Why would Rucker (who I will still always think of as Hootie and I still kind of hold a grudge against for ripping Wagon Wheel but overall seems like a good dude) let Daly share the mic with him? Maybe he wants to get ratings up for his new golf show on SiriusXM. And trust me: Daly draws.