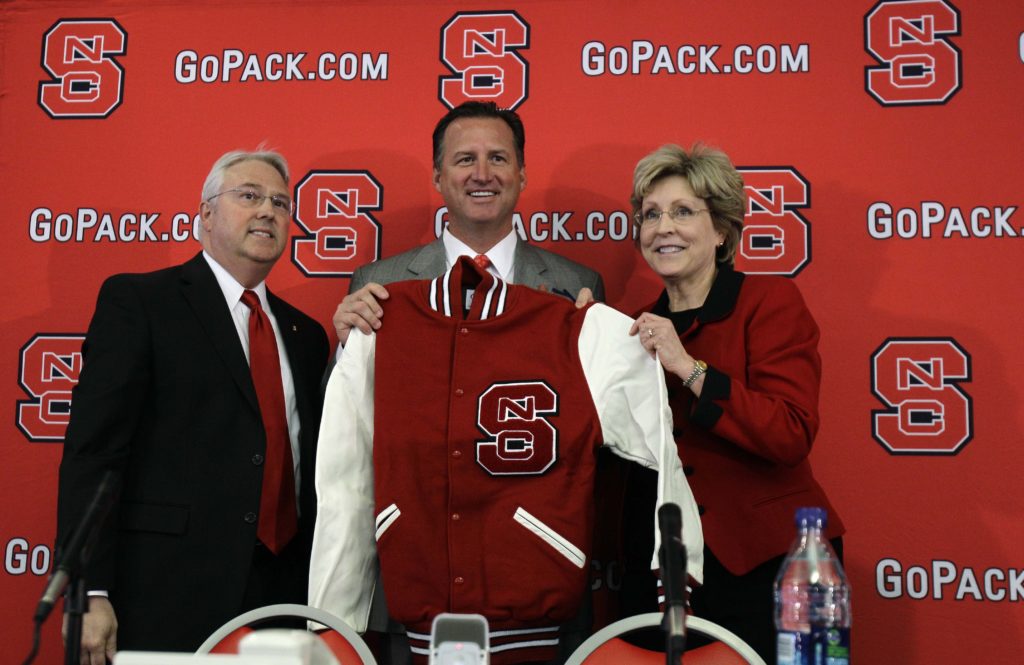 In the SC8 Diary we let guest writers share their unique perspectives of sports in our state. In this edition Patrick Kearney, NC State student and Raleigh resident, tells us why he’ll always be a fan of the Wolfpack, and the Gottfried family.

It’s funny how some of the simplest memories are the ones that remain with you forever. I vividly remember the day that Mark Gottfried was hired as the new basketball coach at NC State. I was a freshman at Broughton High School and had been meticulously following our coaching search through all of its twists and turns. That was back in the pre-iPhone days for me, so I was constantly sneaking off to our computer lab at Broughton to check the latest ESPN alerts for any news regarding the search. The bell signifying the end of the day rang, and I walked out to the courtyard where all of our friends would always congregate before heading to the busses, practice, etc. The hire was announced and the name ‘Mark Gottfried’ was buzzing all around the courtyard, with not many people being familiar with him. We had heard names being thrown around for the job–Sean Miller, Rick Barnes, Frank Martin, others–so it was safe to say the hiring caught us all off guard. The naming of Gottfried as head coach was especially surprising since the very day before, Debbie Yow sent a letter to all of Wolfpack faithful, basically telling us to remain patient as she continued to try and find a replacement for Sidney Lowe.

I had an hour before baseball practice started. I called my dad and discussed the hire with him, then immediately went back to the computer lab for some quick research on our new coach. What immediately stuck out to me was his record at Murray State, where he coached three successful seasons before being hired at his alma mater, Alabama. What also stood out to me was the fact that Gottfried had the Crimson Tide ranked number one in the country one year, and took them to the Elite Eight later that season. This was especially impressive; Alabama has forever been and always will be a football dominated school. Gottfried was the first coach in Alabama history to earn a salary of a million dollars per year, and did many good things there before being fired midway through the 2009 season. I saw a quote from Coach Gottfried that said “I made mistakes at Alabama. I’m going to make mistakes at NC State, however I will not make the same mistakes.” This sounded so genuine to me, and came off as a man that was humbled, learned from his time at Alabama, and was ready for another chance. I entered the computer lab that afternoon with trepidations about our new hire, but left with optimism and hope. Gottfried was relatively young, very experienced, and hungry to prove himself once again.

When we were freshman and sophomores at Broughton, we were not allowed to go off campus for lunch. This constricted us to either eating in the cafeteria, the courtyard, or the picnic tables. My friends and I always chose the picnic tables when the weather permitted, and this is where I met Coach Gottfried’s son, Cameron. Cam was quiet, as anyone would be having just moved to a completely different area of the country in the middle of high school. Some of the best sports conversations and debates I have ever had in my life took place at those picnic tables, sometimes involving dozens of people. We honestly should have filmed it and produced First Take High School Edition or something, it was nuts. Cam and I became close friends throughout this time, due in part to our love for NC State and sports in general.

The first time I met Coach Gottfried was in the Spring of 2012. Cam had invited me to make the drive with him and his family to the ACC Baseball Tournament in Greensboro, where State was playing UNC. Coach Gottfried took Cam and I down to the field before the game, and I got to go into the Wolfpack dugout and meet head coach Elliot Avent and a couple of the players. As a sophomore in high school who had grown up idolizing anyone and everyone within the NC State sporting community, that night was like a dream. Not only was Coach Gottfried kind enough to bring me along, he introduced me to Debbie Yow, took me down to the field, and chatted with me like we had been friends for years. Fortunately for me, this would prove to not be a one-time thing. The night after one of my football games, I went over to Cam’s house to have dinner and hang out on his back porch. It just so happened to be the night that Beejay Anya was on his official visit to Raleigh, and the Gottfrieds were having a big dinner at their house for Beejay, his family, and some assistant coaches. I walked in and Coach Gottfried immediately introduced me to Beejay and his family, and asked me right away how my game went. For him to take time away from trying to convince one of the most prized recruits in the country to come to State in order inquire about how one of his sons’ friends played in a football game, speaks volumes about his personality and his character. I could go on and on with these stories about Coach Gottfried and the generosity that him and his family have shown me over the years.

Today, February 16th, 2017 is a very weird day. It is a day that many factions within the Wolfpack faithful are celebrating, and also a very sad time for many of us. I am not going to go into specifics about whether or not Coach Gottfried should have been fired. Both sides could make a compelling argument, and it is a moot point seeing as the deed has already been done. What I will say however, is that State fans as a collective need to do better. The Tweets and Facebook posts that I have seen directed at Coach Gottfried over the past several weeks are not only disgusting and ignorant, but also paint a sad picture of the sports landscape today. While no one is happy about the way this season has gone for the Wolfpack, these so-called “Fans” need to keep in mind that nobody wants to win more than Coach Gottfried. He is trying everything he can to right this ship, and it is the least we can do for someone who restored honor and dignity to a downtrodden fan base. Thank you for your time in Raleigh Coach Gottfried, you left it a better place than you found it, and that is good enough for me.