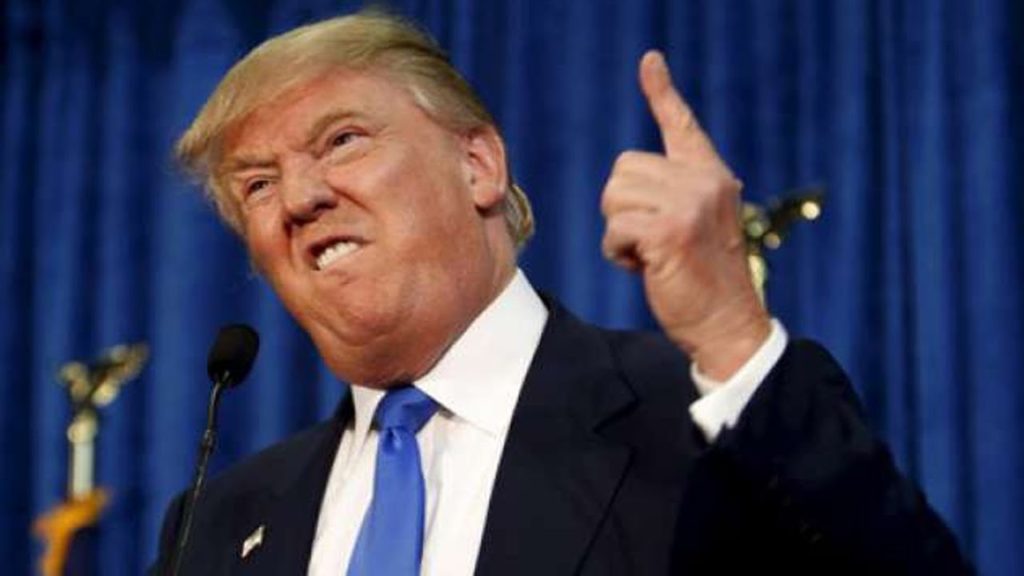 EDITOR’S NOTE/DISCLAIMER: While SportsChannel8 is primarily a sports network, occasionally we’ll dabble into actual news. We’re also dedicated to objective journalism. With Republican Presidential Nominee and Great Pumpkin Lookalike Donald Trump holding a rally in Greensboro today, however, we felt the need to deliver a H8r’s Guide to the hilarity.

Donald Trump is coming to Greensboro, marking the return of a bouncy orange ball to Triad after the ACC Tournament packed its bags and moved North. The Republican candidate for president enters the week on an unexpected and unprecedented hot streak, starting a campaign with no political experience and surging to the top of the polls. And after HB2, Trump may be the last successful start-up to come to North Carolina.

North Carolina is a perfect state for The Donald to campaign in. After all, the Carolina Panthers and North Carolina Tar Heels are prime examples of part of Trump’s mantra, winning so much that they got tired of winning and bowed out in their respective championship games. Plus, the state’s college football teams also practice the art of exaggerating attendance numbers to their own events.

“Thousands” will turn out for what will be an absolute spectacle, and as somebody who has actually covered a Trump rally before, I’m here to give you a proper guide of what to expect when Trumpamania runs wild in the heart of the ACC.

If you’re reading this, you know what Donald Trump is all about. Trump wants to “Make America Great Again,” bringing the country back to the days where there were less of those brown people and “Jock Jams” were just called “today’s hits.”

When Trump comes to town, he comes with a very clear message: He’s here to win. What’s beautiful about his approach is that there’s no specific plan for winning, or who we’ll beat, but dammit we’re gonna win. It’s very similar to Boston College’s approach to the 2016-17 football/basketball seasons.

We’re gonna build a wall. This will be a key go-to topic for Trump when he feels things are getting testy on the podium. Nobody goes to see the Rolling Stones for the deep cuts from their newest album. Play the hits, baby. Trump won’t go on one prolonged rant about getting the Mexican people to pay for the wall or actually building the wall, but rather pepper it in when he’s got some momentum going. “Yeah, we’re gonna ban Mediterranean food from small-market towns. Mediterranean food is for weak loser pipsqueaks, we don’t have time for those. *small cheers* AND WE’RE GONNA BUILD A WALL AND IT’S GONNA BE THE BIGGEST WALL YOU’VE EVER SEEN AND THE MEXICANS ARE GONNA PAY FOR EVERY PENNY OF IT WHETHER THEY WANT TO OR NOT *GREAT APPLAUSE*.”

That’s not his only fallback. When you get into the venue, you’ll notice two things: 1. Oh my god what is this smell and 2. The media section is literally locked in a pen in the center of the room. This isn’t to fully separate the media from the Great Americans of Greatness, but rather to protect the media from attendees. I made the mistake of leaving the pen to get crowd shots before Trump took the stage in Gaffney, SC, and was met by glare after glare after glare until finally a nice elderly man kindly explained that he didn’t like me.

So when Trump feels like he’s losing his crowd, he has fish in a barrel in the center of the room to shoot. “These guys right here, they’re LYING to you.” The media is out to get Trump, and as a result, it’s out to get every single person in the room. The cameraman next to me kindly explained, this happens every time. Sometimes the crowd just boos. Sometimes a battery finds the head of an innocent reporter.

That’s not to say Trump won’t test the waters. In the Gaffney rally that I attended, Trump stated that waterboarding suspects wasn’t going “far enough,” adding that America should find the families of these guys to really wring the answers out of them. Why? “They’re out here chyoppin’ people’s heads off!”

And most recently, Trump has added Muslim people to his repertoire, specifically after the tragedy that took place in Orlando Sunday morning. He’s going to somehow take credit for the deadliest shooting in American history. He’s going to somehow twist this incomprehensible horror into validation for his hateful platform. He will tell you we should be scared that more violence like this will happen (which is somewhat true, although that’s more because his party’s baby-like hands in the NRA’s pockets).

And if the crowd in Gaffney told me anything, he will receive a standing ovation for these offensive, horrifying, off-base comments.

Imagine all of your friends from high school that you kept added on Facebook posting memes about “Blue Lives Matter” or posting statuses demanding black people pull their pants up. Trump rallies are where these people congregate to bathe in each other’s racist filth. It’s like the Gathering of the Juggalos but the clown is painted bright and orange instead of white and black and they’re there to celebrate WHOOP WHOOP instead of hatred.

Seriously, I can’t begin to describe what you, educated SportsChannelM8, will get yourself into if you decide to attend this political monster truck rally. They’re mean. They’re particularly, uh, Southern. And they will scorch you alive if they think you’re part of that evil liberal media. There’s no altercation, physical or verbal, they won’t attempt to start.

For example, when we left the electrical factory in Gaffney where Trump held his rally, we asked some bystanders where the best place for food was. They first asked us if we were media, and then asked if we supported Trump. After my friend Shaker explained we weren’t allowed to have a favorite candidate, the supporters finally begrudgingly gave us a recommendation (and frankly one of the best meals of my life).

What would they have told us if we called ourselves Cruz or Rubio or Clinton or Sanders supporters? Pizza by Alfredo?

And then there’s the most unnerving, jolting, horrifying segment of the crowd: The children.

The basis of Donald Trump’s message is fear. We should be afraid of Mexicans, so we need to build a wall to keep them out. We should be afraid of Muslims, so we should ban them from our country. It’s a message that harkens to the fear-mongering of the days of segregation. It makes sense that this horrible message would resonate with people who did everything they could to restrict the rights of people who weren’t like them when they were younger.

Look at this child in Gaffney: 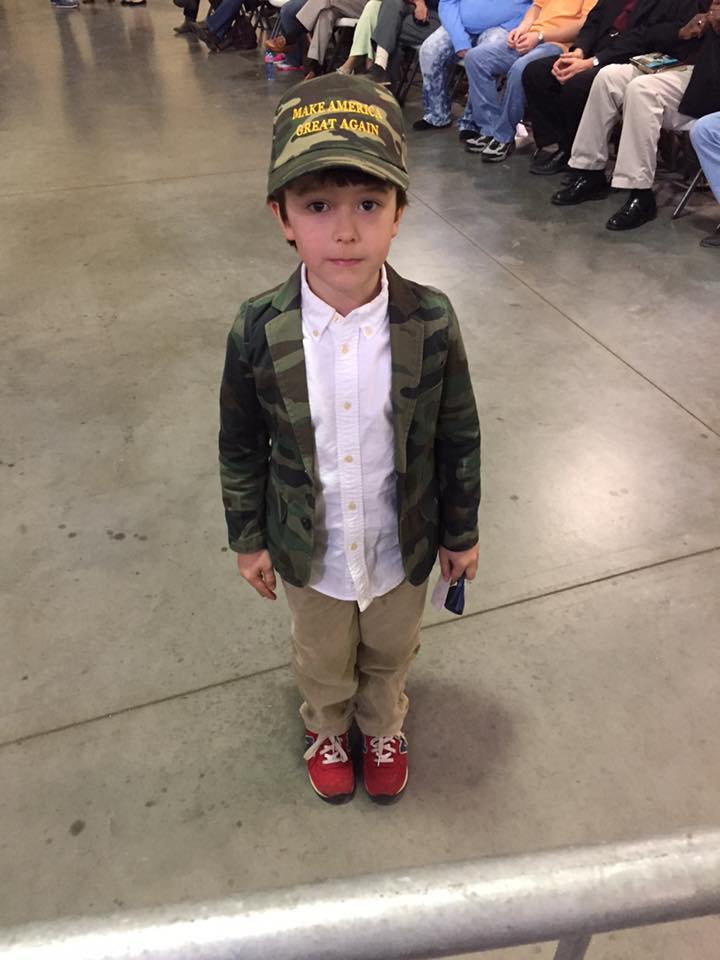 His name is Tad, and he made his parents bring him to the rally, dressed in his absolute best to see his new hero. He wasn’t the only child there, but he was the one who stuck out the most. The blazer, the button-down shirt, the enthusiasm. He cheered when other people cheered, and sat listening intensely while others did the same. It was a harrowing sight, and there will likely be another Tad in the crowd Tuesday.

If you choose to attend the rally, and our #thoughtsandprayers are with you if you do, this is the scene you will see. Hatred and fear wrapped in American flags. Oppression and ignorance cloaked in patriotism and ‘80s rock ballads. Children, not knowing any better, falling into the trap.

Make North Carolina great again and please get the hell out of our state, Donald.